Former Kakamega senator Bony Khalwale has warned Raila Odinga against playing with the minds of the Lugha people, after announcing today that He would nominate Wycliffe Oparanya as a minister in His coming government, saying that He has perfected the Art of not following the constitution, which does not allow anyone to name Ministers now.

Khalwale revealed that Raila should be in prison because He went against the Constitution the second time in History by announcing His Cabinet Ministers even before becoming the president, which is against the Kenyan law. He added that His decision to name Oparanya as one of His coming Ministers is a plot to conveince Lughas to vote for Him again so that He can keep playing with them, urging that the Western Kenya people are aware of what Oparanya and Atwoli are doing and they won't listen to them anymore.

"Raila should not even be addressing crowds but be in jail because He literally broke the law and went against the Constitution which does not allow Presidential candidates to name their Cabinet Secretaries before entering Office. He has also picked Oparanya as one of His Ministers of He climbs to power, and that's a strategy to win Lughas again after destroying them, but it's too late because our people have mastered the bad games that Atwoli and Oparanya are playing. "The former Senator says. 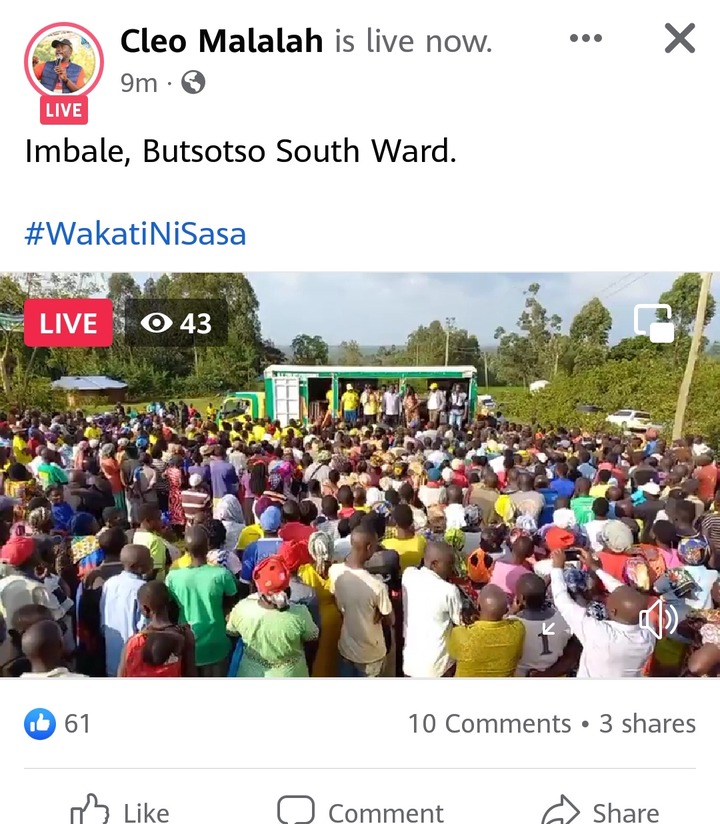 He went on to attack Hon. Titus Khamala saying thag He has allegedly been paid by Uhuru Kenyatta to come and insault Lugha leaders who are against Azimio coalition, despite the fact that Musalia Mudavadi picked Him when He was nothing and appointed Him as the Chairman of ANC Party in Kakamega. Khalwale also reminded Khamala that He stood with Him when Kakamega people claimed that they won't vote Him as Mp, and now He should be careful or He will be forgotten forever politically.

"Another disgrace here is Hon. Titus Khamala who has demonstrated that He won't give back the same energy and thank us for what we did to Him. He never had any supporters when He was campaigning for Mp and I talked to my people to elect Him. Mudavadi also had earlier appointed Him as the ANC Chairman of Kakamega, hence building Him politically, but He has been paid by Uhuru tu come and insault us. He should take care or He will loose everything politically. "He added.

Khalwale spoke in Imbale, Butsotso south ward, while being accompanied by Cleophas Malala and other leaders.