National Assembly Speaker Justin Muturi, has lashed out at Deputy President William Ruto and former Prime minister Raila Odinga, over what he termed as campaign slogans meant to entice the electorates.

He stated that the DP's bottom-up economic model was inapplicable, telling him that he should be accountable to Kenyans as an elected leader and not just dishing out promises.

Muturi also pointed fingers at Orange Democratic Movement leader, Raila Odinga, accusing him of using entertaining slogans such as Tialala and Tibim, yet no one knew their meaning.

"I decided to dig out and understand the meaning of 'Tibim' and 'Tialala' but unfortunately no one knows the meaning, even those who use those phrases," stated Muturi.

He further urged Kenyans to be cautious with the leaders they elect, advising them that the campaign phrases were just meant to hoodwink them to cast their votes.

"Kenyans should stop following leaders blindly, they should look at their ideas not campaign phrases. Some leaders thrive on these phrases," he added.

Muturi was speaking in Meru county at Living Water's Church, where he continued with his campaign for the presidency, reiterating that he would not relent on his quest to ascend to the country's top seat.

The speaker also donated 5000 tree seedlings to the EAPC Kathithi Bible Study college, where he launched the construction of hostels for the same institution.

"On behalf of the National Assembly, I have given out 5000 fruit seedlings in line with the National Fruit Tree Planting program," he stated.

Muturi, who is on a three-day tour of Mt Kenya to popularize his presidential bid, promised to strengthen the health care system once elected president.

He also vowed to strengthen devolution, noting that it had brought a change to many people living in the rural areas.

Justin Muturi will be vying for the presidency with the Democratic Party ticket, having been endorsed by the party in November 2021. 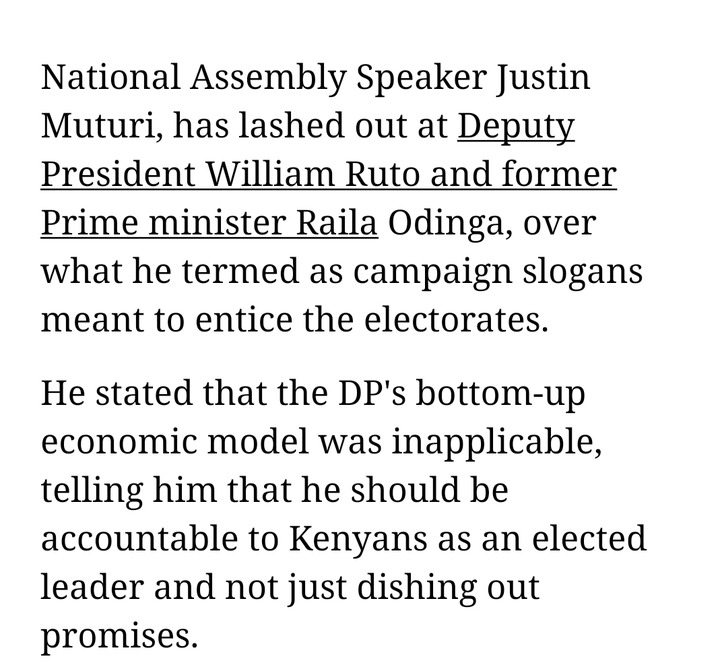