By Tysonwa (self media writer) | 3 months ago 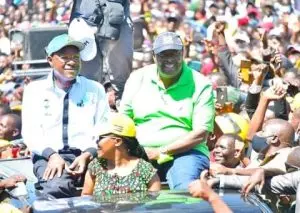 Talking to Twitter on Thursday 27th January, Donald kipkorir alleged that despite the two political giants joining the forces together in the recent days, they are passing conflicting messages to their supporters whenever they give speeches.

He alleged that while the second in command is praising the job well done by the government and takes credit to himself, ANC party leader Musalia Mudavadi is busy accusing the government of it's failures.

"Both are telling excited crowds in one forum they are running for presidency. One is praising the government development record while the other is accusing the President of being the failure in matters of development."

Content created and supplied by: Tysonwa (via Opera News )