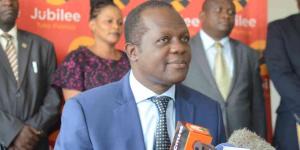 Jubilee Party Secretary-General Raphael Tuju has revealed that a section of Kieleweke affiliated Members of Parliament wants him out of the party.

Speaking to a local daily on Sunday, October 2021, Tuju stated that the Uhuru-allied legislators want to ouster him ahead of the 2022 general elections to access the party's funds that will arise from nominations.

The cabinet secretary without portfolio stated that some legislators want to change the party's leadership to secure tickets ahead of the general elections.

"The MPs think having control of the party machinery will secure tickets. The noise comes with the territory. There are substantial resources. They think being at the helm gives one control over the resources," he said.

Tuju rubbished the lawmakers' motives, saying their selfish ambitions will lead to the downfall of the Jubilee party, which has experienced heavy losses in the recent by-elections.

Tuju's remarks come after a series of meetings held by the legislators from the Mount Kenya region that resolved that the party can only bounce back to its glory upon the overhaul of its top leadership.

Speaking to Kenyans on October 14, Tuju addressed rumors of being locked out of Jubilee's headquarters propagated by Deputy President William Ruto's allies.

"I am currently behind my desk at Jubilee Headquarters and I have just finished a meeting with some of our staff. You are free to come and take a picture," Tuju stated.

Kieni MP Kanini Kega blamed Jubilee's top leadership for the defeat in the Kiambaa and Juja by-elections, calling them out for not being on the ground to help the party clinch victory.

He accused Tuju and the party's Vice-Chair David Murathe of failing to offer leadership during the mini-polls, which led to the humiliation, stating that they should pave the way for reforms in the party.

"Some of the hard decision is to ask some of the officials of Jubilee party to pave way for other fresh leaders to take part in the restructuring of the party. From the secretary-general going down," he stated.

He further alleged that the party would make fundamental changes to help it address significant challenges it has experienced in the past.

"We have to make some changes and some of the decisions we are going to make are fundamental changes," he promised.