The President of Kenya, honorable Uhuru Kenyatta has banned the sale of scrap metals all over the country in order to reduce the increasing cases of suspects who are said to be vandalizing government structures in order to sell them.

In the past few months, a number of kenyans have been Busted vandalizing government structures for different reasons. In the latest incident, the Kenya Power and Lighting Company claimed that the main cause of the black out that occured a few days ago was due to the fact unknown suspects vandalized a KPLC station in Embakasi.

While reacting to this incident, kenyans who took to their different social media accounts to express their opinions and suggestions on the matter, have called out president Uhuru Kenyatta claiming that it was so unfortunate that he was doing this despite the fact that Alot of people were making a living out of this.

According to the reports given by kenyans who expressed their fear and concerns over the rising cases of theft in the country, they claimed that the rate of crime in the country was going to increase due to the fact that most people were going to rely on other means to make money.

Njoki... I don't understand why President Uhuru Kenyatta does some things honestly. Most of the men and women in the country are currently making a living through this. Let's all prepare for an increase in crime all over the country. 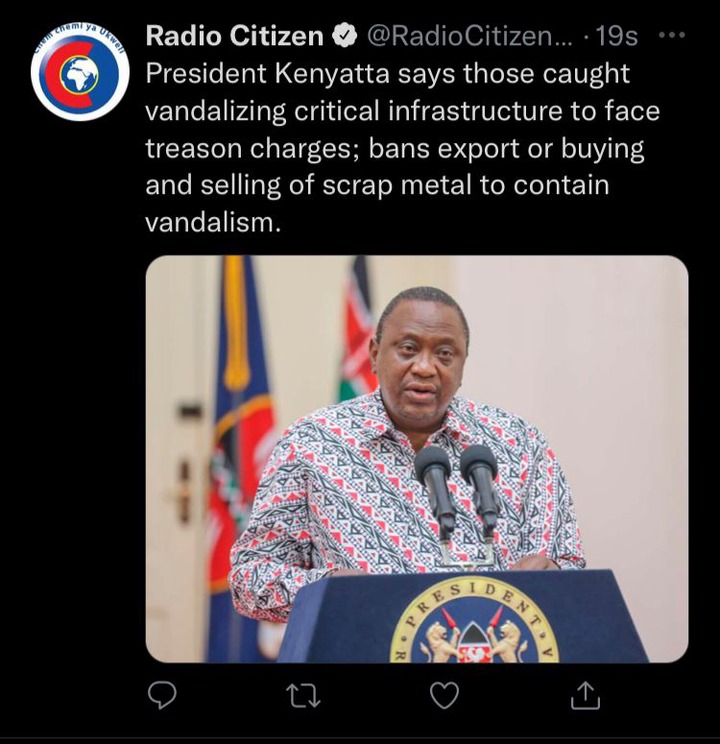