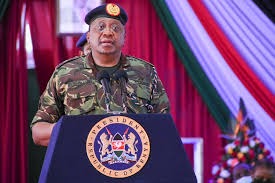 On Saturday October 16, the president, Uhuru Kenyatta joined the Kenya Defence Forces (KDF) as the commander in chief of the defense force in marking the 10th anniversary of their day. The function was held at the Kahawa Garrison where the president addressed the attendants in honour of the crucial day.

Talking about the Nationwide night curfew, the president joked that he was tempted to extend until 3rd November because he had seen a productive benefit following the curfew era. He made it clear that more babies have been conceived since the beginning of the era. There have been reports of increased birthrates during the period and that serves as an achievement to the nation according to the president. Uhuru Kenyatta made this clear after he noticed a large number of children at Kahawa Garrison.

This also comes after political leaders called upon the president to lift the night curfew so that to allow the ordinary Kenyans to carry on with their businesses freely.

Led by Mudavadi, Sakaja and Murkomen, they urged the president through media to remove curfew for the benefits of the Kenyan economy.