Opinion: Kenyatta Succession May Not be a Walk in the Park

By Randomthots (self media writer) | 10 days ago 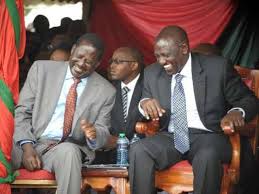 With so many shots at the presidency and barely making it, would it be more prudent to do things alittle bit different. Two times now Raila and his supporters have claimed victory after botched elections, but the one case standing out is the 2007 Election that saw Kibaki and his handlers cook the numbers and hand him victory, the aftermath as we all know was disastrous after Kibaki was sworn in at night fall.

Of course the next general election of 2017 was so messed up that the supreme Court had to quash it. In both occasions and others in the past, Raila has come to the realisation that ascending to power is not very easy especially when you are at loggerheads with the deep state.

Lets leave Raila for a while. Let's talk about Ruto just stay with me it will make sense later why Ruto is rejected, Raila embraced and BBI looks like the golden tablet that will solve all our problems.

The deep state is smart you have to give it to them, but before that let's discuss William samoei Ruto. For a long time Ruto has known that most mount kenya people hate Raila actually for no reason at all and the best way to penetrate the mountain has been to feed on the hate while endearing himself to the mountain folks.

The grapevine has it that after taking office Ruto came out so strong to appear to be very busy running the government , everytime he would expressly and authoritatively declare how much they had allocated as a government to projects left, right and center., there was nothing wrong with that and all of us believed he was riding on the goodwill of the president. But at night away from light and all the paparazzi he would brag to his people and cronies how he was the one operating the government and quickly discredited and dismissed the president as a useless being only given to the bottle. In a nut shell Ruto was the Boss.

So when the deep state caught wind of this and some other clandestine activities he was involved in like the scandals that rocked the treasury, and siphoning of millions from parastals that he was given when they shared the government with Uhuru. The deep state was alarmed in addition to the fact that he always seemed to be reading from his own script.

So a plan had to be hatched and BBI was born. First of all they knew that Ruto was a wrong a choice to succeed Uhuru and though Raila wasn't in their camp they knew he is a good man who could listen and strike a few deals and compromises here and there, and because they don't want to entirely hand over the government to Raila they designed BBI to incorporate some of their leaders into the government of 2022, and the main reason why they settled for Raila was because they know with or without Mount kenya votes Raila can easily get enough votes from his traditional support base to ascend to power or alternatively force a run off. They think if he can master a few votes from the mountain region it would be an added advantage.

So BBI was never for Raila it was a bargaining tool by the ruling elite and business magnets of this country to make Raila president and at the same time remain in the mainstream politics and government mega business deals.

Fast forward after the BBI flopped at the high Court, what happened next? Chiloba is appointed the CEO of Communication commission of kenya. After the hue and cry about how elections were carried out, the best the deep state could do was to bring chiloba to an organisation which is a critical component of the election process in terms of information sharing and relaying of final results.

What's that? Is that not the deep state showing you the middle finger, if kenyans have taken the appointment of Chiloba at CCK lying down now, you can be sure to take homes any outcome they will feed you out of 2022 polls.

Now all the governors, senators, MPs and MCAs are a confused bunch of people, they don't know which way to go, in the days to come we will witness plentiful defections and more defections. Some think Ruto and his bottoms up economics has really gotten him support and he could just circumvent all the other odds to clinch the top position.

Those looking at Raila think the greatest impediment ever that has blocked his way for years that's the deep state is on his side, added to the fact that he enjoys a huge national following but with his former allies kalonzo, Musalia and Wetangula still out there looking for where to go it could complicate the equation for Raila if they decide to form their own party or join UDA, party associated with DP Ruto. And one last thing it might not be very easy for Dp Ruto to ascend to power if he has to fight it out with the deep state, my only advise to the hustler nation be watchful so that we make sure its a free and fair election.

Content created and supplied by: Randomthots (via Opera News )