By Matha.wendo (self media writer) | 1 month ago 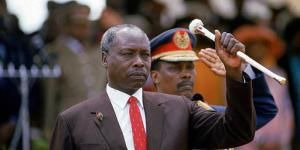 According to his Will presented in court, Moi left a 931-hectare parcel of land to be distributed among his five sons; Jonathan Kipkemboi Moi, Gideon Moi, Raymond Moi, Philip Moi and John Mark Moi.

He gave clear orders to his trustees at Kabarak University to share the ancestral land equally among his sons who would, later on, transfer the parcel to their children.

The former President, however, did not include a contested Ksh2.5 billion parcel of land in Muthaiga, Nairobi, in his will. The19.7-acre Muthaiga land was excluded from his Will dated November 15, 2005, and the rewritten Will a few years later.

A US-based Kenyan doctor, Dr George Kiongera, had opposed the distribution of Moi’s wealth, arguing that a case was filed at the Environment and Lands Court in Nairobi to determine the ownership of the land.

Moi was accused of selling the land to three different firms at the same time between the years 1988 and 2016. Kiongera asked the court to expunge the parcel from Moi’s Will. The court, however, detailed that the land was not listed in Moi’s codicil (rewritten Will), thus could not halt the distribution of his wealth.

David Chelugui, the son of the former chief, Noah Chelugui, also asked the court to remove lawyer Zehrabanu Janmohamed as Moi’s executor and trustee of the Will. Chelugui sought Ksh1 billion compensation his family won in a 2019 land case against Moi.

The court heard that Moi’s family filed an appeal against the case yet to be determined. Justice Aggrey Muchelule dismissed the application by the former chief’s family stating that the court could not stop the implementation of Moi’s will.

In February 2020, retired AIC Bishop, Silas Yego, disclosed that the former President shared out his wealth before he became ill and passed away in February 2020.

“This was something that he did sometimes back before his condition deteriorated and lost his voice. He made sure he shared out his property among all his children and dependents.

"The Will was deposited with one of his lawyers that I cannot tell you,” Yego stated. 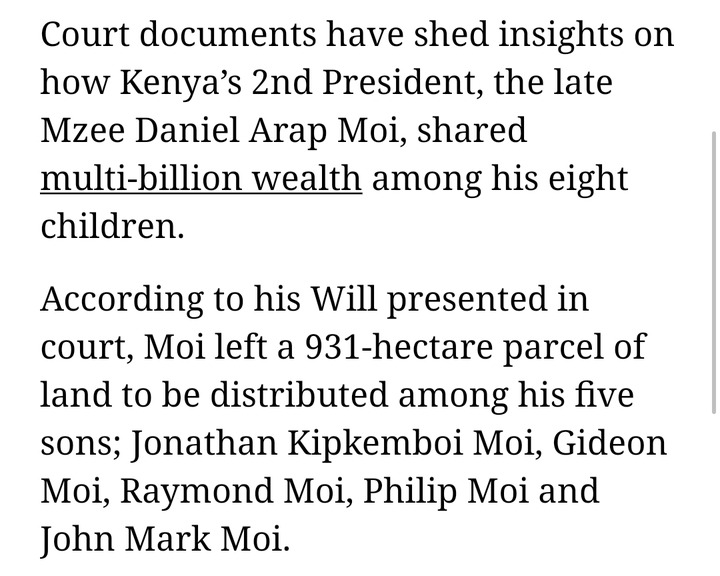 Just In: NPS Breaks Silence After 31 Bodies Are Mysteriously Dumped at River Yalla