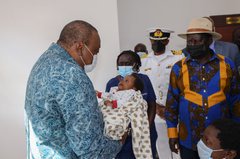 Former Prime minister Raila Odinga will undoubtedly be on the ballot in next year's general election.

Raila is going to battle it out with the deputy president William Ruto who has also declared his interest.

Another presidential aspirant is likely to come from one Kenya Alliance which is believed to be a third force that can easily force a runoff between Raila and Ruto.

However, there are still efforts aimed at Uniting the OKA leaders behind Raila Odinga for an easy Victory aggainst Ruto.

Raila Odinga has been very busy trying to court the mount kenya region which is rich in votes.

Earlier this week, he toured several places in central where he got a warm reception after which he met a group of Tycoons on Tuesday.

On Wednesday, he accompanied president Uhuru in opening of a hospital in Kibra afterwhich they held a rally together with Uhuru giving a clear indication that he will support him.

Now after this perceived exploits, Political analyst Mutahi Ngunyi carried out an online poll on whether it's Raila's time.

This clearly reveales that Raila still has more homework to do so as to enter into the minds and hearts of Kenyans. 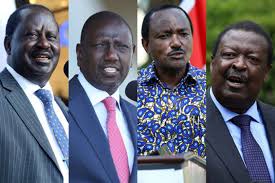 On Friday, another poll conducted by former Kakamega senator bony khalwale on who is the best candidate to face DP William Ruto, Raila emerged top.

The ODM leader gearnered 66.5% followed by Musalia Mudavadi at 20% while Gideon Moi who got a nod from his party KANU to Contest for presidency only got 8.4%. Wiper's Kalonzo Musyoka managed 5.1%.

This reveales the following:

One, Raila is still the most preferred Candidate to face Ruto in 2022 if one Kenya Alliance decides to back him.

Three, Gideon Moi's star is rising and indeed he has a bright future following his move to declare that he will be on the ballot. 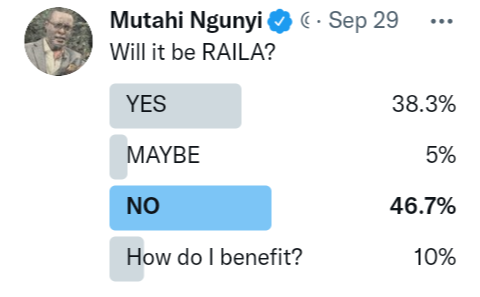 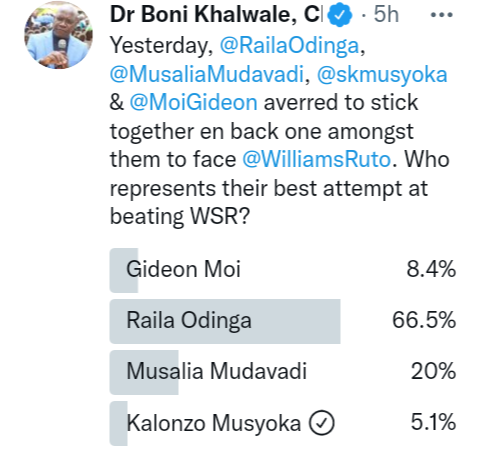