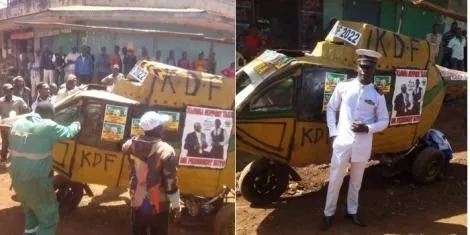 An aspiring Mount Kenya politician has built a chopper-like wheelbarrow fully fitted with his own devised number plate.

Jim Murithi Mbogo, who is seeking to become the next member of the county assembly (MCA) for Gaturi South ward in Embu, built the chopper-like wheelbarrow using locally assembled materials such as iron sheets and scrap metals.

Jim, who is famously known as Jim KDF, unveiled his piece of art on Wednesday, January 26, taking it for a road test in his hometown of Embu.

The homemade locomotive is painted yellow with campaign stickers on the side. However, it does not take off like other planes but it is rather pushed by people.

Jim is seeking to become the next MCA in Embu under the United Democratic Alliance (UDA) affiliated with Deputy President, William Ruto.

Through a viral poster, the Mt Kenya politician is reaching out to Kiharu Member of Parliament, Ndindi Nyoro, to bolster his political aspirations.

Jim, who is also a budding musician, has asked for Nyoro's help in reaching the Second-in-command so as to compose for him a presidential campaign song ahead of the August 9 general election.

"Ndindi Nyoro kindly ask Deputy President William Ruto what he said about a song I composed for him for the August election," part of his poster read.

The youthful politician has capitalized on his creativity to make a political entrance using UDA.

Additionally, he has a signature look always donning a white suit and a cap resembling that worn by the Kenya navy, earning him the name Jim KDF.

Jim's innovation comes just days after another man from Mombasa became an internet sensation after building a UDA branded car.

He, just like Jim, used local materials such as scrap metals to build the car, noting that he earned his skills from repairing tuk-tuks in Mombasa.

Good News For Azimio Coalition After The Latest Development On Kalonzo Is Revealed. See Here.

DP Ruto To Fly To Convene A Crisis Meeting

Situation Gets Messy At Coast As DP Ruto's Men Clash Badly, DP Ruto To Fly There