The main headline on the standard features the top two candidates in next year's general election.

Deputy president William Ruto will be making his first stab at the presidency while the ODM leader Raila Odinga will be trying to be Kenya's CEO for the fifth time.

According to the paper, both Ruto and Raila are already busy branding themselves starting from the way they dress to the type of friends they move around with.

In his tour of the coastal region, the deputy president William Ruto has always been in the company of kikuyu MP kimani Ichungwa and Malind's Aisha jumwa.

On the other hand Suna east mp junet Mohamed has been the face of ODM raila Odinga's campaigns having accompanied him to Turkana, Eldoret and yesterday in Isiolo.

The two are keen on taking credit for the good deeds of Uhuru's administration while distancing themselves from the failures.

In another story, Kirinyaga Governor Ann waiguru is on the horns of a dilemma regarding the type of Party to use in next year's election.

Having hinted at joining United Democratic alliance which is associated with deputy president William Ruto, waiguru has an uphill task to deal with Women rep Purity Ngirici who has declared to contest for gubernatorial in UDA.

Finally, Audit has revealed that counties spent Ksh 12 billion on local travel alone despite the restrictions on movement due to covid-19. 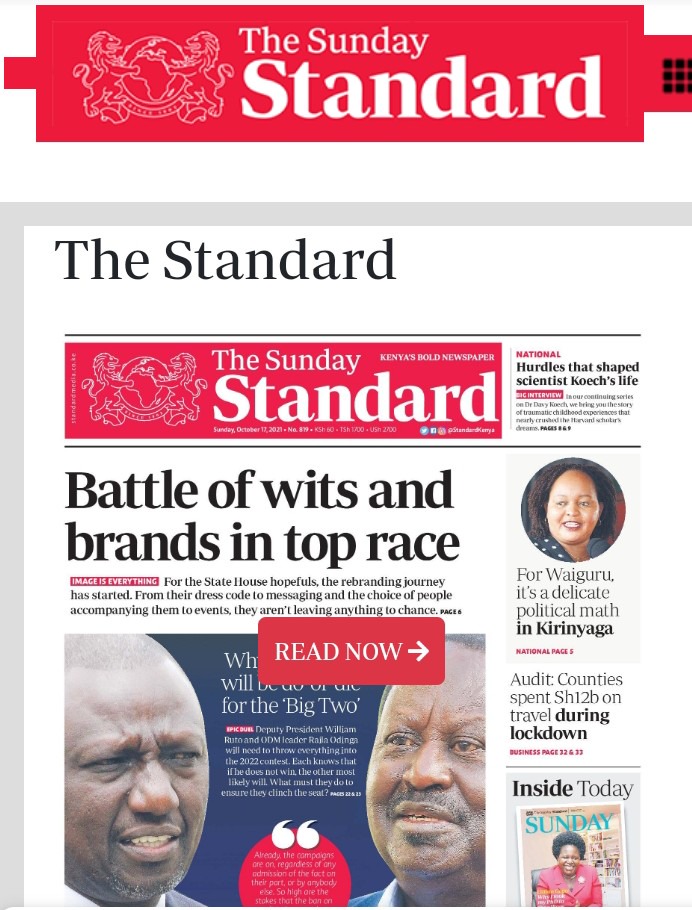 The Swahili publication's headline focuses on the ilegalities both DP William Ruto and Raila Odinga have been engaging in even as they seek to occupy statehouse.

Ruto has been propagating the ideologies of UDA party even when he is still a member of jubilee where he is the deputy party leader.

On the other hand, Raila odinga has been occasionally moving around with cabinet secretaries which is against the law.

Recently he was seen in north eastern with Treasury cabinet secretary Ukur yattani against the requirements of law which says that CSs should be involved in partisan politics.

In another story, Siaya governor Cornel Rasanga has announced his desire to vie for Alego usonga constituency seat after leaving the Office of governor.

Rasanga has been Governor for Siaya since 2013 and according to the law, he isn't allowed to defend his seat for the third time.

His decision has however been castigated by ODM bigwigs with Siaya senator James Orengo and Rarienda mp Otiende omollo backing the incumbent mp Samwel Atandi to defend the seat.

And in sports, Liverpool FC made light of watford when Fermino scored three goals (Hart trick) with mane and Salah adding one each to boost their chances of lifting EPL having performed dismally last season.

In another match, Manchester Unite continued in their poor form when they suffered a humiliating defeat in the hands of Lycester city. 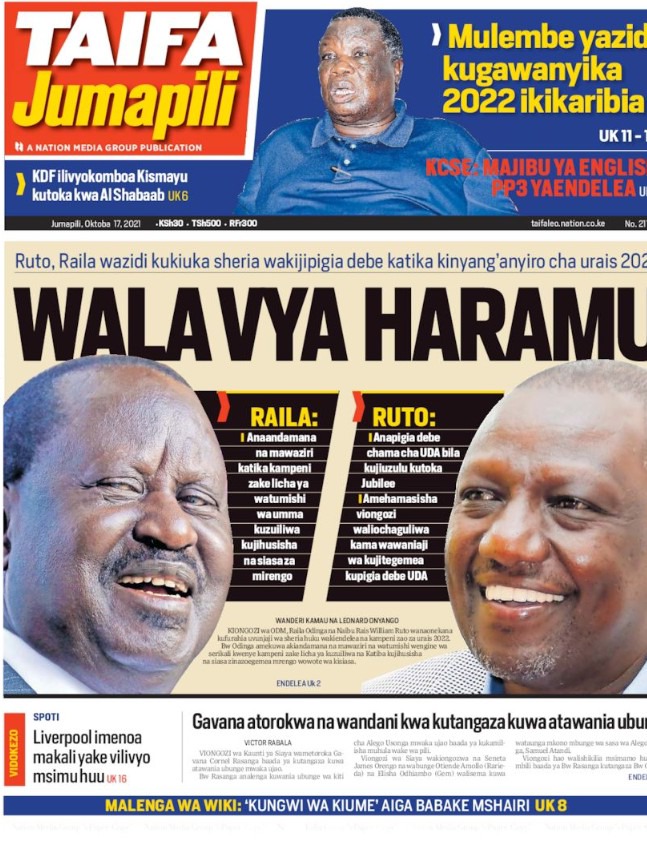 The nation trains it's guns on the wrangles that are threatening the nascent party united Democratic alliance (UDA) which is associated with the DP William Ruto.

At the centre of the storm is the list of 31 officials which had been published to the chagrin of many supporters.

While the party chairman Johnson muthama calls the wrangles disquiet Democracy, the protesting side is hearing none of it as it claims that the list contains cronies and sidekicks.

In another story, jubilee secretary general Raphael tuju has now opened up on the silent wars within the ruling party claiming that there are people who want him out of Pangani which houses jubilee headquarters.

The ruling alliance has been experiencing haemorrhage as a number of mps have ditched it to Ruto's UDA.

It's poor performance in recent by-elections in central made a number of kieleweke leaders demand the removal of Tuju and vice chairman David murathe.

And finally, Kirinyaga Governor Ann waiguru is staring at empty nest syndrome that normally affects parents when children leave. Follow the story in the nation. 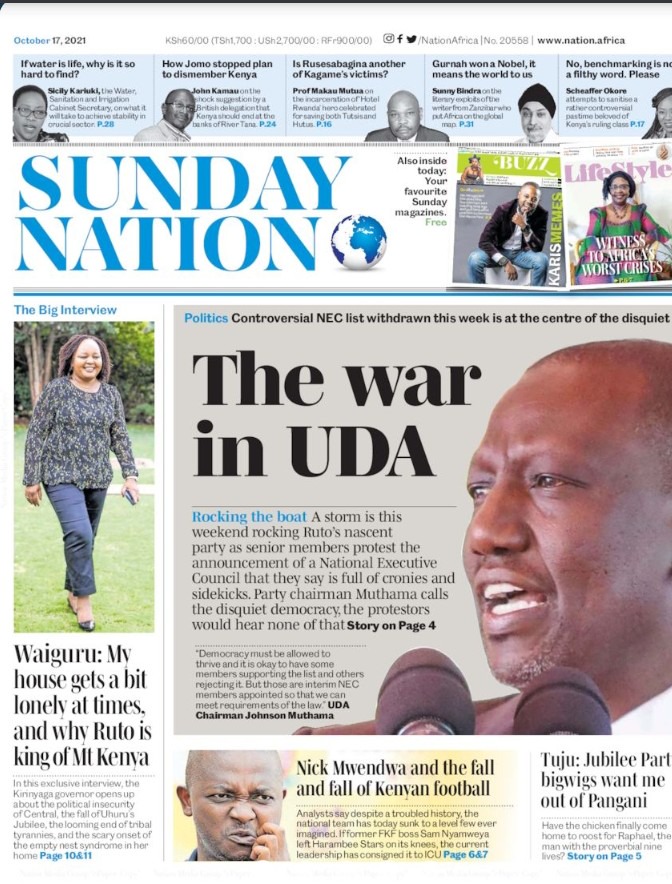