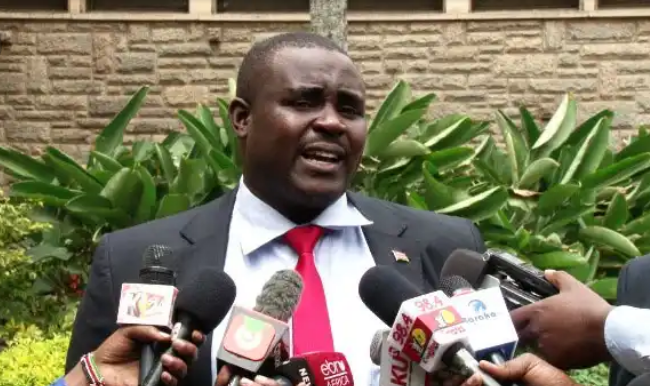 Kakamega senator Cleophas Malala made a naughty tongue-In-cheek remark, suggesting that in Upper Hill, there happens to be a dry-cleaning laundry office, and went on to describe how governors have been seeking laundry services from the said office.

Although the shrewd senator didn’t mention any names, he made it crystal clear who and exactly what he was talking about.

Cleophas Malala said this while appearing on Citizen TV’s morning show Daybreak which was hosted by Sam Gituku.

In a clear reference to Raila Odinga and his Capitol Hill office, Malala claimed that most of the governors who are presently supporting Raila Odinga’s presidential bid aren’t doing so on a matter of principle but due to selfish and self-centered reasons.

He asserted that most of the governors who declared their support for Raila on Monday have cold cases with the EACC, and have been threatened into supporting Raila failure to which their cases will be activated.

He then made the sensational claim that in Upper Hill there is a dry-cleaning laundry office which governors regularly visit in order to be cleansed, and have their corruption cases disappear.

Of all the 22 second-term governors out of the total 47 set to retire at the and of the year, 18 support Raila’s initiative that is driving his August 9 State House contest.

A high-profile source who attended Sunday’s Naivasha meeting during which the decision to support Raila was reached said the first-term governors backing Azimio also hope to benefit from the its campaign machinery.

The source said there is “strong optimism” in the Handshake team that brings together President Uhuru Kenyatta and former Prime Minister’s camp that the Building Bridges Initiative (BBI) which was declared unconstitutional by the courts would be implemented under a Raila presidency.

BBI had proposed constitutional amendments to allow for expansion of the Executive, additional funds to counties and appointment of Cabinet ministers from inside and outside Parliament.