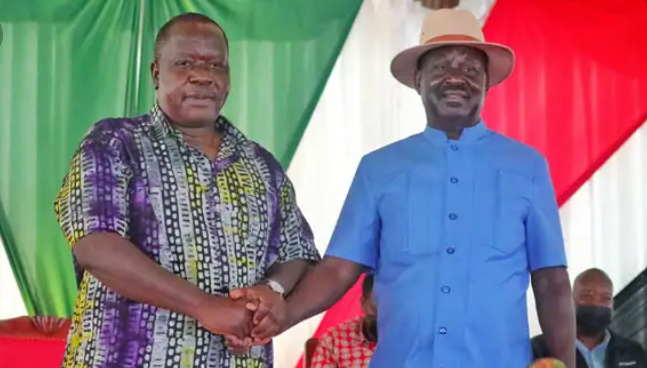 Speaking in Nyamira County yesterday, Raila noted that the initial plan from his camp was to endorse Matiang’i to take on Deputy President William Ruto in the forthcoming elections.

Raila says that this was an agreement before a changeover happened with Matiang’i agreeing to pave the way for the former Prime Minister.

According to the ODM boss, Matiang’i insisted that he (Raila) should be the one to go for the top seat, especially following the March 2018 handshake between him and President Uhuru Kenyatta.

“We discussed with him how things should be, and at one time I said I was ready to support him (Matiang’i).

“But when we did a review to look at how the ground was, he told me that I should be the one to go first,” Raila stated.

Matiang’i stated that the plan for his Presidential bid changed when he received direction from his boss, Uhuru to settle on his handshake partner, Raila.

Raila, in a bid to show unity amongst the Kisii leaders, initiated a handshake between Matiang’i and Kisii Governor James Ongwae.

The two leaders had been waging a political war in a bid to prove supremacy as the region’s kingpin.