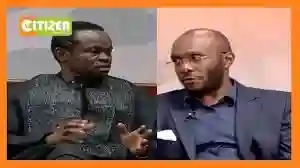 The BBI discussion dominated the lengthy debate at the punch line hosted at k24 on Tuesday evening.

The two fiecest critics of BBI Professor lumumba and Dr muluka seemed to be reading from the same script as they took turns to 'tear' the document into pieces.

This is what lumumba said about the document.

Lumumba aded that all the BBI is proposing is there in the Constitution but implementation has been the problem.

"Affirmative action it's there, youth develoment is there county allocation is there because when you have a minimum you can have a maximum." He said.

Lumumba explained that all well meaning Kenyans have been saying this but the handshakers have refused to listen as if they are the ones with the Monopoly of wisdom on what ails Kenya.

He said that the BBI which came out of the the handshake started with an empty thing that later on forced politicians to add some sweeteners which are already in the Constitution so that it can be accepted.

He continued by saying that political bad manners doesn't warrant a Constitutional change and therefore this isn't a constitutional moment.

Lumumba seemed to be agreeing with Ruto on multiple question refrendum when he lashed at some Politicians for terming Kenyans as iliterate.

"Some politicians have said that we cannot have a multiple-choice referendum because the people are semi-literate; this is contempt for the electorate." He said.

In his concluding remarks, he urged for more concesus ahead of the refrendum.

"I wish that after parliament has heard voices from all spheres that we have a national convention to discuss these issues before we go for the referendum" said lumumba. 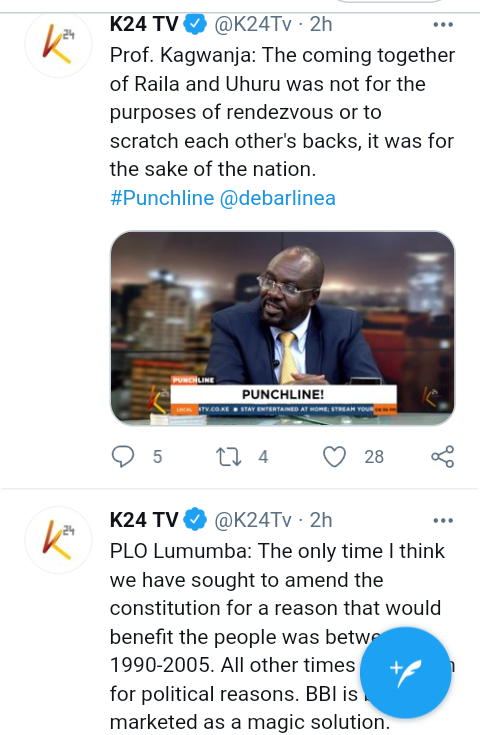 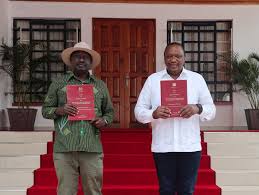 On his side Muluka concurred with lumumba that indeed the BBI has just brought sweeteners and not solutions to the current problems of electoral mulpractice and others of inclusivity.

"Every so often we have to breathe life into the constitution but we must be careful what kind of air we breathe into it. Many times politicians breathe bad air into it in the name of change so they add sweeteners. These sweeteners are the trojan horse.

Now we are being told that even if the election is stolen then you will not complain because we created five new positions for you., tell me will we not have the same violence that we have has before?" Said muluka.

"Despite devolved functions, the funds are not following the functions. A few months ago the governors were complaining that the15% was not getting to them.

Have we costed the BBI or identified the source of the funds?" Asked muluka

The BBI bill is set to be tabled in parliament although MPs feel that they should amend some sections on the additional Constituencies and the appointment of the ombudsman.

This is happening at a time when the IEBC has termed the move to create more Constituencies ilegal as it's the only Constitutionally mandated Commission that can delimitate boundaries.

Is the BBI end all be all? Feel free to share your thoughts and comments on this on our comments platform.

Will Murgor's Previous Crimes Prevent Him From The CJ's Post

"Mr. President We Are Tired" Kenyans Angered With Suffering Brought About By Uhuru's Curfew Rules

The Country Should Prepare for Another Mt Kenya President, We are the Majority - Mukurweini MP