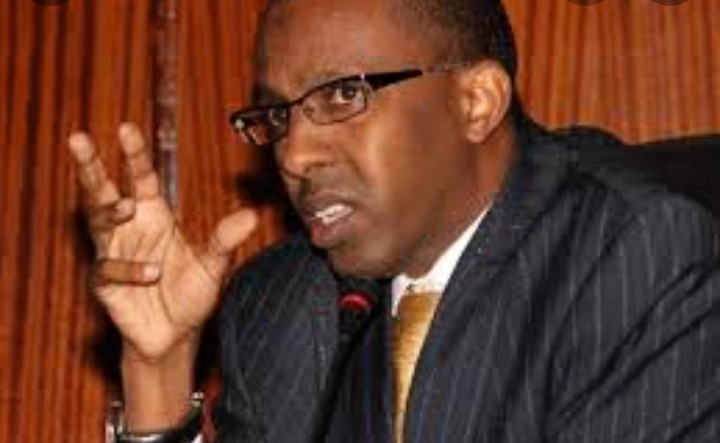 Former President of the law society of Kenya Ahmednassir Abdullahi has finally addressed allegations that has been circulating on social media claiming that Tangatanga faction together with their allied lawyers were planning to head to the Supreme Court to defend their win, in the just concluded presidential elections.

Speaking through Twitter, Ahmednassir said that any candidates who were fronted for the Presidential race should not consider moving to court to challenge the results in the supreme Court of justice, since their supporters may have began to be pushy and eager to have their favorite leader being crowned as the winner.

He further claimed that the IEBC Chairman Wafula Chebukati together with other officials have gone extra miles to do an extra wonderful job for Kenyans, which enhanced transparency, and fair treatment for all the leaders who participated in the whole exercise, which keeps the debate live on social media platforms. 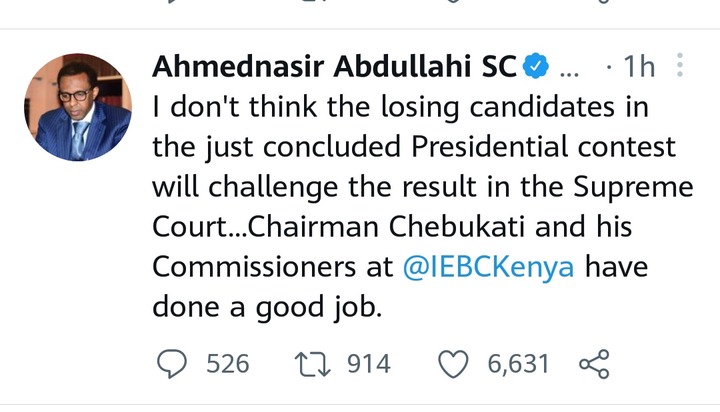 Earlier today, allegations were doing rounds on social media with Azimio bloggers like Lord Abraham Mutai, Robert Alai and others claiming that they have got inside information from a clear and reliable source that Abdullahi and other lawyers were assembling themselves with heavy legal materials to head to the Court and challenge the counting exercise, while seeking for a verdict that would favour them.

Reports revealed that the Dp who has not given His own comments on the same has been stuck between choices, with His close advisors taking charge to make the moves, due to intelligence reports. Other coalition members kept their efforts high while updating Kenyans on the ongoing exercise.

However, Dp William Ruto during an interview with a local radio station last year said that He will concede defeat if He is genuinely defeated from the ground votes, adding that He will not step in Court to take any pleas, or even make the Country lose it's own way of operation by calling for a halt in Kenyans works so that they can hold peaceful demonstrations to claim their win.

Aden Duale, Aisha Jumwa and Kipchumba Murkomen Told the Best and Worst Sides of Their Jobs

"Next Month Azimio Will Not be The Majority" Wiper MP Says, Criticizes Colleague MPs Who Joined KKA

Why President Ruto Retained Simon Chelugui in His Cabinet, Gave Him a New Ministry

'It'll be a Sad, Dark Day if Azimio are given Majority' Didmus Tells Speaker Wetangula

"I Cannot be Caged in Azimio, Speaker Protect Me From The Abusive Marriage" Kamket Says He's in KKA

Sad News For Manchester United Fans As Their Player Is Set To Leave In January.