By TomTindo (self media writer) | 11 days ago 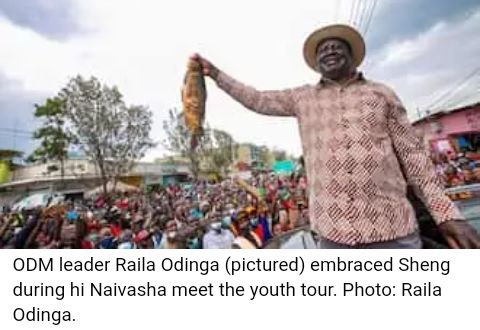 _The former prime minister pitched tent in Naivasha on Saturday, October 9, where he addressed the youth in Sheng

Orange Democratic Movement (ODM) leader Raila Odinga has caused a stir online after embracing Sheng during his tour of Naivasha.

The former prime minister pitched tent in Naivasha on Saturday, October 9, where he addressed the youth in Sheng.

Raila was reacting to a woman who handed him a fresh fish after his entourage stopped in the Rift Valley town.

"Made brief stopovers in Naivasha town, l'm happy to see our people coming together. Our journey continues," Raila explained.

Raila was in Naivasha, Nakuru county, where he popularised his Azimio la Umoja initiative.

Sheng is a unique language

Raila also said that Sheng is Kenya's unique language that needs to be adopted.

"Societies change over time, Sheng is our unique identify all over the world Sheng ndio kusema!" said Raila. 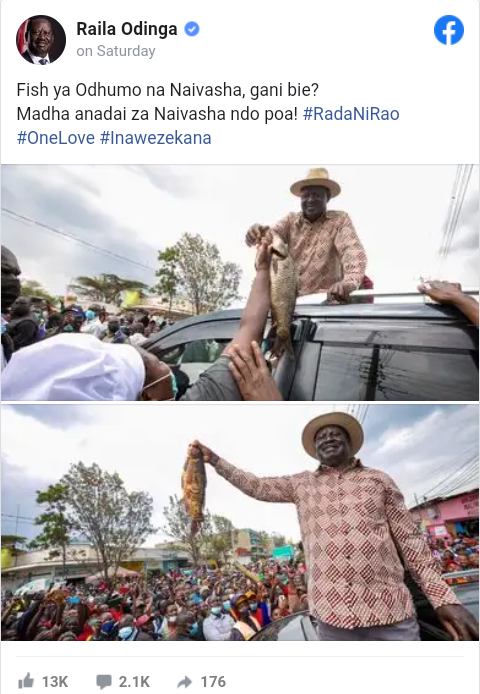 "I was impressed by the progress of the ongoing nationalwide voter registration exercise l am calling on our people to stand up and be counted step forward the register, " Raila said.

His first stopover was at khiwliba Secondary School in Luanda constituency.

He also used the opportunity to drum up support for 2022 presidential bid.

"I publicly said that I would make a major announcement at the end of this month, and I now want to see that my foot soldiers are well_armed. So make sure you have the gun (national identity card) and bullet (vote)," Raila told residents.

Raila said that his decision to be on the ballot box as a presidential candidate in 2022 would depend on the number of new voters registered in his political strongholds across the country after the going national voter registration exercise ends in early November.

"Rift Valley Is Not A Bedroom Of Anyone," Senator Moi Reveals Bringing Business To A Standstill

"It's Not Deep State, " DP Ruto Reveals Who Will Help Form The Next Government