Joho And Sonko Clash At Polling Station In Mombasa 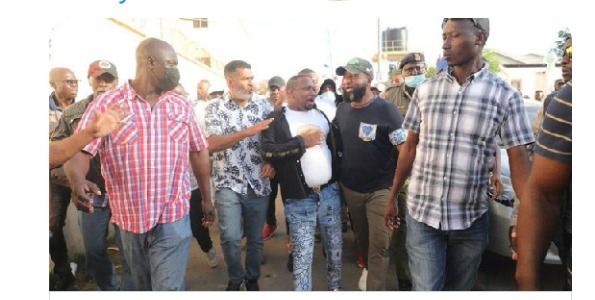 On Tuesday, as the voting process was coming to a close Hassan Joho the governor of Mombasa and Mike Sonko the former governor of Nairobi, got into a fight at a polling place.

After they met at the Marycliff Primary school polling station they disagreed while the two were wandering around and observing the voting procedure.Before the altercation could worsen police intervened.

After they had bailed out Mvita UDA candidate for MP Omar Shallo who was being held at Makupa Police Station Sonko and his prospective running mate Ali Mbogo arrived in Marycliff.Joho who attended the polls together with other Azimio la Umoja officials

Shallo and MCA candidate Samir Bhalo were both taken into custody for allegedly interfering with the election at the Tudor Village Hall.

Police were attempting to stop inhabitants belonging to opposing camps from throwing stones at one another when the two were detained.

After a violent altercation between ODM and UDA supporters at the station in Mombasa County mayhem broke out.

What Raila Said About IEBC and August Elections

Kenya Kwanza, A Member Of Parliament, Gives His Constituents His Whole Salary