By Faithormulerai (self media writer) | 2 months ago 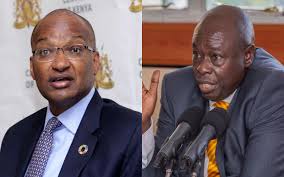 Cherargei has claimed Rigathi Gachagua should be respected since he is the second in command and the office he holds also deserves respect.Gachagua has been criticized lately by Central Bank of Kenya for alleging that Central Bank does not have enough foreign exchange for importing fuel.

CBK in response told Gachagua that they do not offer foreign exchange for oil importation and instead it is done by the commercial banks of Kenya.This has led to Senator Cherargei coming to Gachagua's rescue claiming that state agencies like the CBK should look for appropriate channel of communication other than the presser and media.

Cherargei said,"to all state agencies and officers,stop responding to our DP Gachagua through social media and pressers."Cherargei added,"there are better channels to communicate on Government issues and it's about respect to the office."Please share and follow me for more news.