By KDF.POLICE.SERVICE.UPDATES (self meida writer) | 29 days 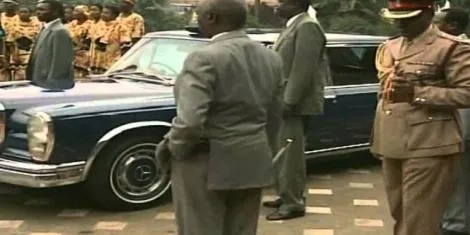 Former President Daniel Moi was known to be a tough and strict man in his 24 years as President.

During his tenure, only three men had the privilege of riding with him in his official limousine.

The Late Laikipia Senator G.G.Kariuki, former Minister Nicholas Biwott and former Attorney General Charles Njonjo were the only people who got an opportunity to ride in Mzee Moi's limousine.

Biwott got to ride with the President as they were close allies and at one point he (Biwott) served as Mzee Moi's personal assistant for 12 years.

G.G and Njonjo, on the other hand, got to ride in the limousine when they together with the former President attended an event.

Deputy President William Ruto while paying tribute to the Late G.G, confirmed that he knew him after being told that only the Senator and Mr Njonjo had drove in the President's limousine.Senator Kariuki and Mr Biwott, have since died.

Kariuki, who was the oldest member of the 11th Parliament, joined politics in 1959 and was elected to the National Assembly in 1963.

The Senator formerly served as Laikipia West MP and a Cabinet Minister in President Jomo Kenyatta and Moi's administrations.

He first served as Minister for Internal Security and Provincial Administration until 1983 when he was moved to the Lands, Settlement and Physical Planning Department.Biwott, on the other hand, died on 11th July 2017 after a long illness.

'Total Man' as he was popularly known, served as a Member of Parliament (MP) for 28 years in Keiyo-Marakwet and Keiyo South Constituencies.

Until his death, Biwott was the leader of the National Vision Party.

Meet the Only Incumbent Senator Who Holds an Engineering Degree (Photos)

Finally, DP Ruto's Position On BBI Is Revealed By His Close Ally