"I Have No Experience With Prostitutes Unlike Your Many Years With Them" City Lawyers Clash Online.

Kenyan General elections slated for August 9th 2022 are quickly approaching and political leaders are traversing the vast terrains of the country campaigning and popularising their presidential bids. 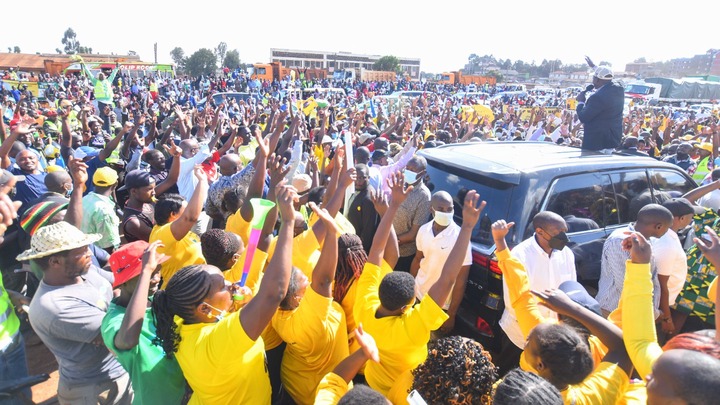 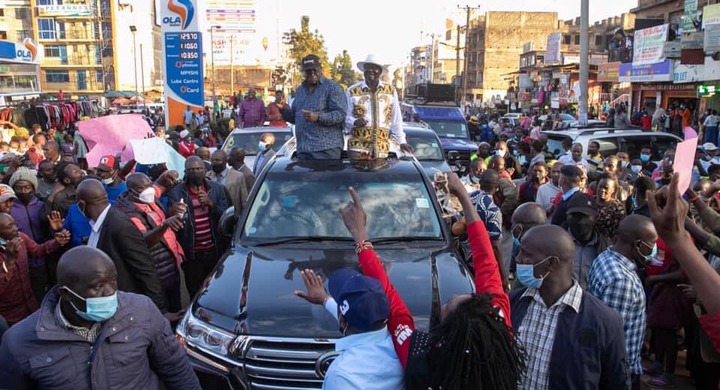 Uhuru is serving his second and last five year term and won't be seeking re-election. He hasn't yet endorsed any political leader as his favorite successor but today two senior city lawyers clashed over his alleged endorsement of Orange Democratic Movement leader Raila Odinga.

In a tweet Senior Counsel Ahmednasir Abdullahi clamed that Odinga is a pet project of Mr Kenyatta and without his support, Odinga isn't a credible candidate. 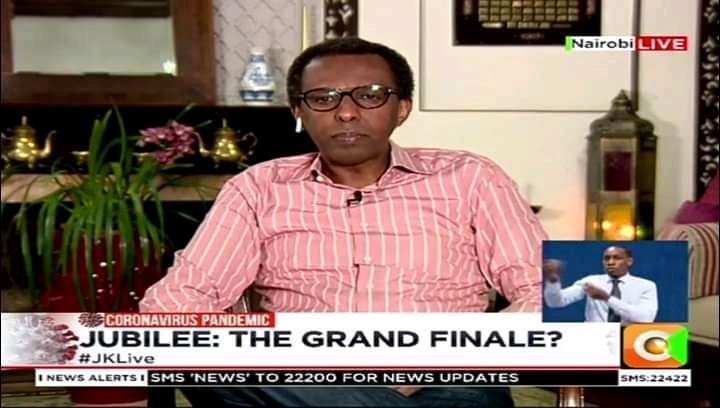 "The truth of the matter is that Hon Raila is not a VIABLE/CREDIBLE candidate without the support of H.E UHURU. And since Hon Raila is Uhuru's PET PROJECT,Uhuru holds the title deed to Raila...don't get me wrong people!...some Kenyans are comfortable with that OWNERSHIP STRUCTURE!" stated Ahmednasir. 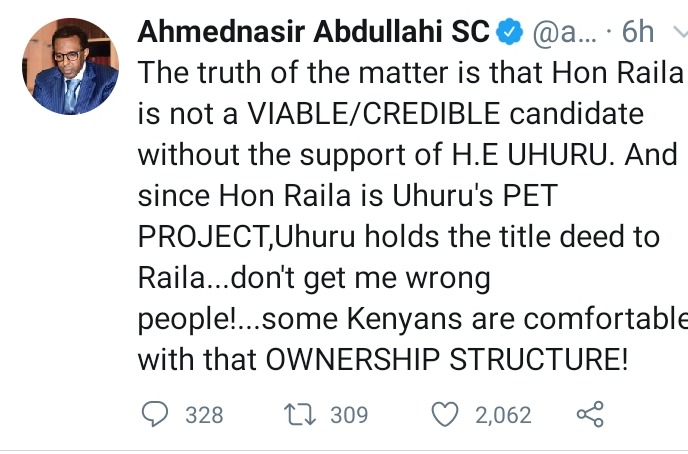 But in a quick rejoinder and reply, flamboyant Nairobi lawyer Donald Kipkorir who is staunch supporter of Raila Odinga claimed that senior counsel Abdullahi had always maintained that Uhuru wasn't interested in 2022 Politics and had opted to shy away from the discussion. But was shocked to see him being erratic after change of opinion. Kipkorir ended up stating that Mr Ahmednasir was erratic than a Prostitute’s underwear. 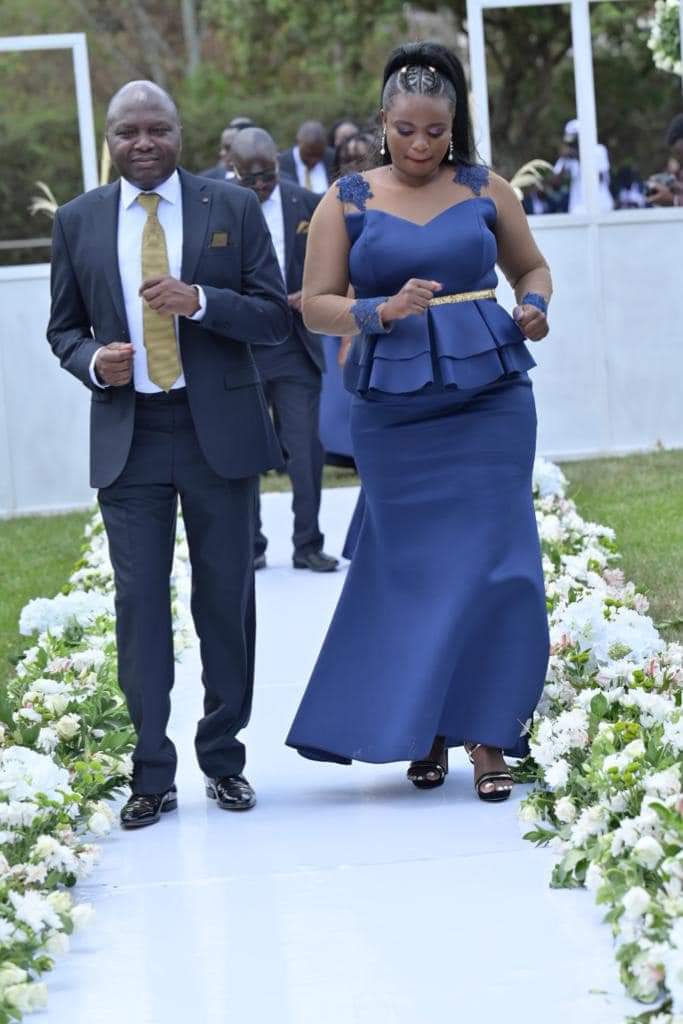 "SC, you’ve said several times that President Uhuru Kenyatta had kept away from 2022 Elections & now you are saying Baba is his Project. You can’t hold both positions. What is your final position so that we can debate? Your positions are more erratic than a Prostitute’s underwear!" 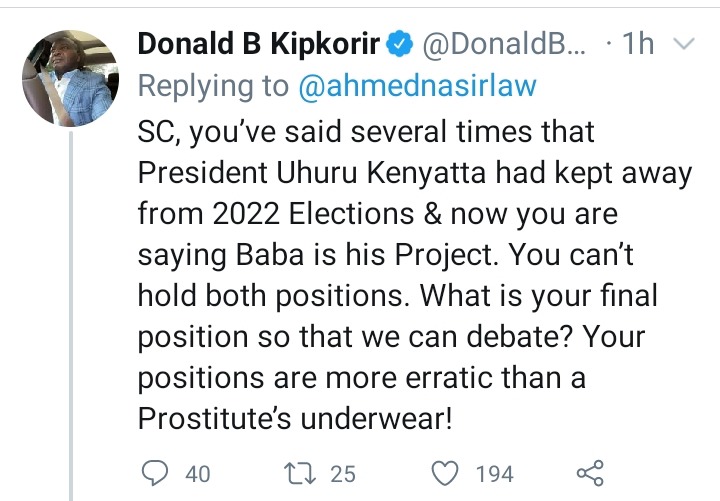 Ahmednasir replied by telling him that he had not encountered prostitutes in his entire life and Advocate Kipkorir was only giving a clear description of the underwear he had experienced over many years.

"Don I have ZERO experience with prostitutes...but I appreciate your graphic description of their underwear which obviously is informed by a wealth of experience acquired over the years!" replied Ahmednasir. 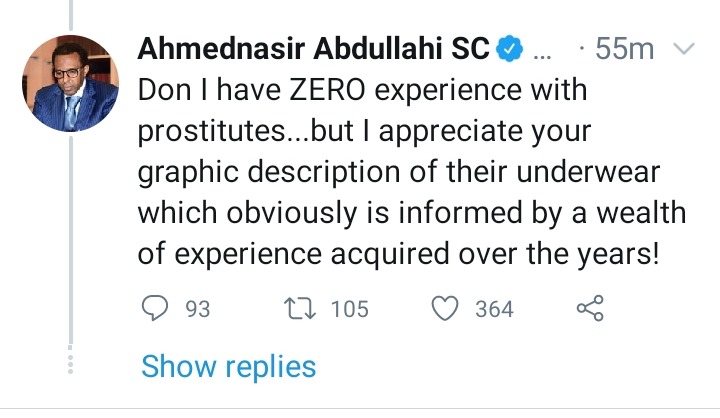