How much Kenya's next President, Deputy will Earn 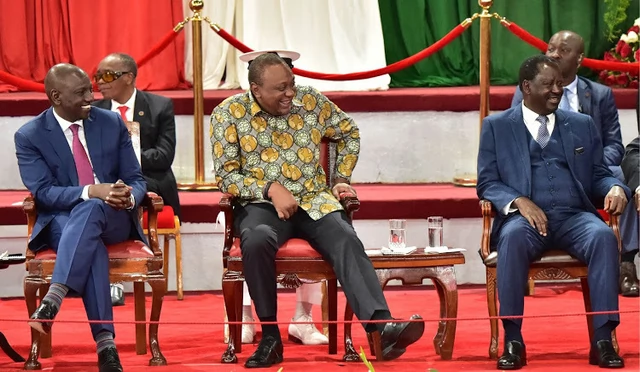 In the supplementary budget estimates, President Uhuru Kenyatta and Deputy President William Ruto's annual salaries will be cut by 11.6 percent.

Kenyatta and Ruto's total annual income will reduce from Sh41.2 million to Sh36.4 million, according to Business Daily. Since the couple assumed power in 2013, this is the lowest figure.

According to the materials submitted to Parliament for consideration, full pay would be reinstated in the fiscal year 2022/23.

The National Treasury, according to a Salaries and Remuneration Commission representative, is best equipped to explain the proposed cut.

Margaret Nyakang'o, the Controller of Budget, said she would contact the Exchequer on the ideas.

"Once the request is received, I shall obtain the underlying legislation from the National Treasury." She replied, "I hope that helps."

State House has been awarded an additional budget of Sh1.89 billion in Parliament's supplementary budget estimate, representing a 47.7% increase over its previous budgeted allocation.

Purchase of new vehicles, official local travels, and other secret operational expenses will all be covered by the additional budget.

The President's Office has boosted the budget for new cars to Sh300 million, up from Sh10 million earlier.

The fuel budget was also increased to Sh98.9 million, up from Sh73 million previously reported.

The rises could indicate that the Kenyan President will travel more frequently as the campaign season for the 2022 General Election begins.

Uhuru Kenyatta has announced that he will run for president in 2022.

President Uhuru Kenyatta remarked during a recent working visit of Mombasa that he had been focusing on service delivery but that he would now be on the road examining legacy projects and digging into the 2022 succession politics.

He stated that he would participate in discussions about who is best qualified to be elected to government, implying that he will be seen on the campaign trail shortly.

"Some people want to live and breathe politics 24 hours a day, seven days a week. I tried to persuade them to prioritize delivery first, but I was told I didn't have the authority to do so, so I gave up.

"I told them that if that's what they wanted, go ahead and do it; I'll work with those who want to work." When the time comes for politics, we will have our say as well. President Kenyatta stated, "That time has come, and you will hear us."

Deputy President William Ruto, on the other hand, slammed the president, accusing him of forcing a candidate in the next elections.