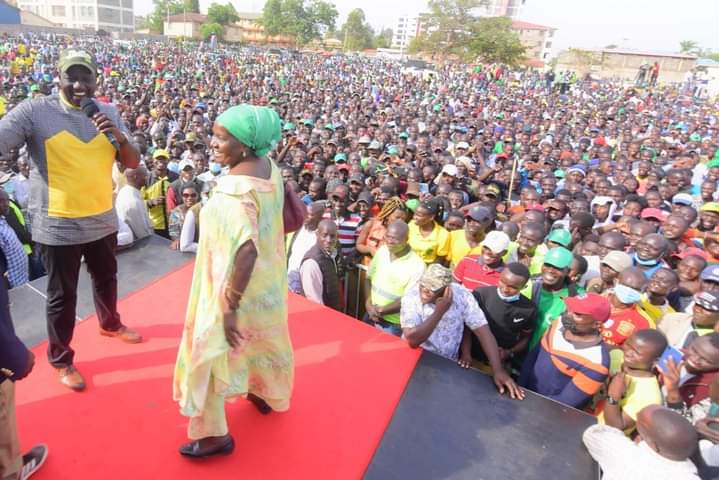 COTU secretary general Francis Atwoli has disowned his first wife Roselinda Simiyu. She introduced herself as his wife at the UDA Bungoma rally yesterday which was graced by the deputy president, William Ruto.

In a tweet which he wrote yesterday evening, he has said that she is no longer in his list of relatives.

Roselinda Simiyu was ushered to the podium by Deputy President William Ruto during the rally where she spoke and introduced herself as the wife of Francis Atwoli.

Which loosely translates to: " ... My husband is identified by name as Francis Atwoli and I am a loyal member of Hustler Nation".

The video footage of her speech happened to go viral on social media; which prompted the Cotu Secretary General to respond via a tweet.

In his tweet , Atwoli said Roselinda is no longer his wife.

In the year 2018, Roselinda Simiyu actually said that her entry to politics in the year 2007 came about after consultations with the Cotu Secretary General..

In 2018,she told Radio Jambo in an interview that she told Atwoli that she wanted to make a change. He agreed and promised to support her in politics. When he was contesting for a political seat for the first time, she as the wife supported him even financially with the money that she had saved to buy herself a car.

Roselinda; who is now aged 57 narrated how she was married to Atwoli when she was 30 years and they stayed together as husband and wife for more than two decades until she was instructed to leave.

She narrated that she met Francis in 1996 when she was a chairperson at the Kenya Union of Sugar Plantation Workers.

After their separation, Francis Atwoli later married KTN news anchor Mary Kilobi whom he said he had eyed for years as his new wife. The two are currently living together as husband and wife. They also have a child together.