Shame As Bungoma MCAs Walk To Assembly With Tissue Paper.

By BOYDFUNATECH (self meida writer) | 24 days

Bungoma County assembly has continued to make lines in the entire country starting from its wrangles with the executive and within the assembly. 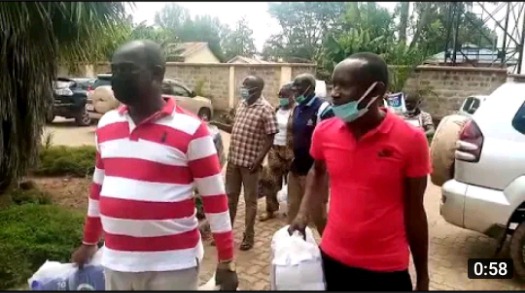 Team of 12 MCAs who support Governor Wangamati deliver tissue paper to the county assembly, the tokens were rejected by assembly clerk, source files.

A team of MCAs allied to Governor Wycliffe Wangamati has surprised the residents of Bungoma and Kenya at large when they moved into the assembly while carrying bundles of tissue paper.

The 12 members of the assembly have accused the house speaker Emmanuel Situma for ashaming them when he appeared at the senate with Bungoma Governor Wycliffe Wangamati.

Situma is on record for telling the senate budget committee that the assembly has no tissue paper.

Situma told senators that Wangamati has refused to released the assembly operations money, a move which he said has paralyzed their operations including buying soap and tissue paper.

However, the assembly clerk John Mosongo refused to receive the tissue papers and termed the move by the 12 MCAs as a plan to intimidate the other members of county assembly.

It should also be noted that Bungoma County assembly was closed due to upsurge of COVID cases.

The tissue paper act has updated Bungoma county on the list of shame, raising questions on the level of leadership in the county.

Alleged Details About the Index Finger and The Ring Finger

Lockdown? What to Expect From Friday's Press Briefing by Health CS Mutahi Kagwe