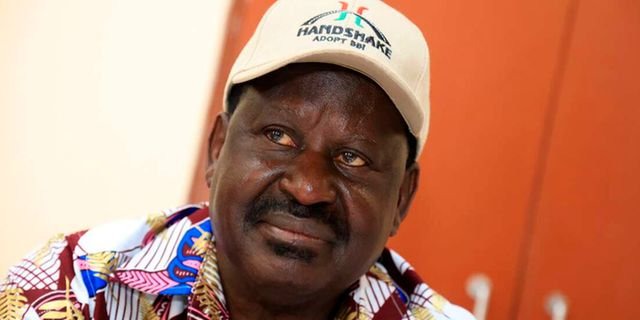 Former Chief Justice Willy Mutunga has named the person most likely to take over as the government's top legal advisor in the event that ODM leader Raila Odinga takes over the government after 2022.

Raila is among the prominent persons keen on succeeding President Uhuru Kenyatta next year, and has began opening up on what he will do for Kenyans if elected, after months of silence on his plans.

Mutunga says that among those apparently interested and likely to take over the position would be city lawyer Donald Kipkorir, a known and very vocal supporter and defender of the former Prime Minister.

But the former judge also opines that Kipkorir could not be the right person for the job, on grounds that the remarks he has been making lately and his anger indicate that he would not be fit for such an office.

"This is a fascist unsolicited and unconstitutional political-legal advice…so anti-people. What kind of Hon Attorney General will you be if Baba comes to power? You have in your anger unthinkingly given us evidence of your unsuitability for that high office!," he says in a tweet. 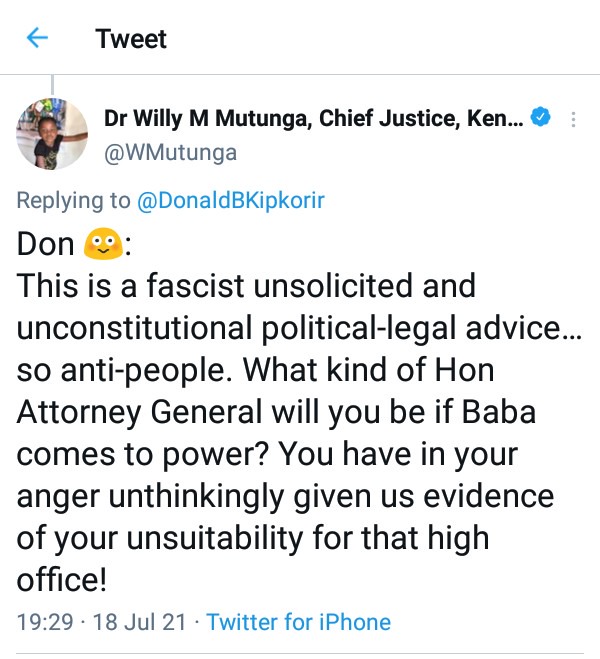 He was responding to Kipkorir's latest advise to Uhuru on how to regain control of his ruling Jubilee Party and the government and how to suppress his rebellious deputy William Ruto his sympathizers.

Kipkorir has advised Uhuru to be a ruthless leader like his dad; founding father Jomo Kenyatta, fire all top state house and cabinet officials and expel Ruo allies from Jubilee.

He also says that there is need for Uhuru to make it known that he has picked Raila as his preferred successor.

"Dear President Uhuru Kenyatta: 1. Fire all your State House top officials, half the Cabinet PSes. 2. Expel all UDA supporters in Jubilee. 3. Declare Baba as your successor. 4. Be ruthless like your father. People love strong man rule and walk away from weak and prevaricating ones," he had said.

The lawyer has been making some very controversial remarks lately and only recently asked Uhuru to hang his handlers if Jubilee to lost to UDA in Kiambaa.

Ruto To Hague? New Twist In Ruto And Joshua Sang's ICC Case As The Court Reveals This Crucial Detail

"Defeating You Be My Business," Kalonzo To Ruto

"I have Given Jesus An Ultimatum Of Only One Week To Buy BMW i8" Famous Gospel Artist Declares.