The Independent Electoral and Boundaries Commision has over the past few days been under fire from sections of the public as well as Politicians who are not satisfied with the way in which things are handled at the Commision.

During the clearing of candidates that was done a few weeks ago, some candidates were barred from contesting in the August General Elections on various grounds.

The Independent Electoral and Boundaries Commision was especially categorical about the candidates that had been impeached saying they will not be featuring in the August General Elections.

One of the casualties of this directive was Karungo wa Thangwa who was said to have been impeached as the CEC in Kiambu County over graft allegations by the Members of County Assembly.

Karungo wa Thangwa who was vying for the Senatorial Seat in Kiambu County on a United Democratic Alliance party ticket, was also barred by the Disputes Resolution Committee and he took the matter to court.

This afternoon, according to Daily Nation Newspaper, Karungo wa Thangwa has been cleared by the court to vie in the August General Elections on a United Democratic Alliance party ticket.

The court has ordered the Independent Electoral and Boundaries Commision to clear the former CEC in Kiambu County to Vie for Senator in the August General Elections.

The court has said that there was never any sufficient proof provided to show that Thangwa had been impeached on Corruption related grounds and is therefore fit to hold office.

It will be interesting to see how the Independent Electoral and Boundaries Commision lawyers will react to this and there is a possibility of matter going to a higher court. 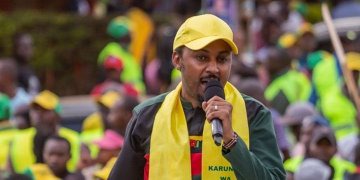