By World_breaks (self media writer) | 9 months ago 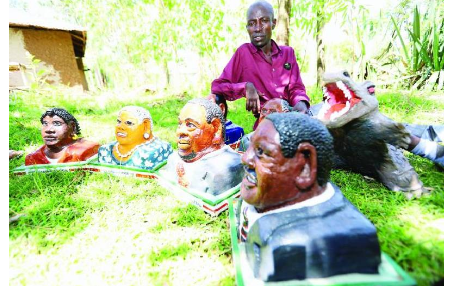 Samuel Otieno from Kisumu County has challenged many and proved the proverb that says disability is not inability. The physically challenged father of three has molded various people and objects. Among his work is are prominent leaders all over the continent which have made him famous and avoid depending on other people as many of the physically people does.

He has utilized his creativity in arts of molding into the fullest. His work was not received well at first as it described the real characters of the political leaders especially the presidents. Many were unhappy with the way he represented Raila Odinga and Kalonzo Musyoka with little resemblance of the real people. Other people that he has worked on their images are Uhuru Kenyatta, John Magufuli, Paul Kagame and Museveni Yoweri.

Samuel has met both Kisumu Governor Anyang Nyongo and Seme member of the parliament James Nyikal who really supported his by purchasing some of his work. Samuel who is a polio victim started his work during his childhood age. His family has praised him as a dependable man who has ability to cater for his family.

Does everyone has a special talent and capability?

How would the authority support such talents?

Content created and supplied by: World_breaks (via Opera News )

Opinion Why Raila Odinga Will Easily Win the Presidency in 2022