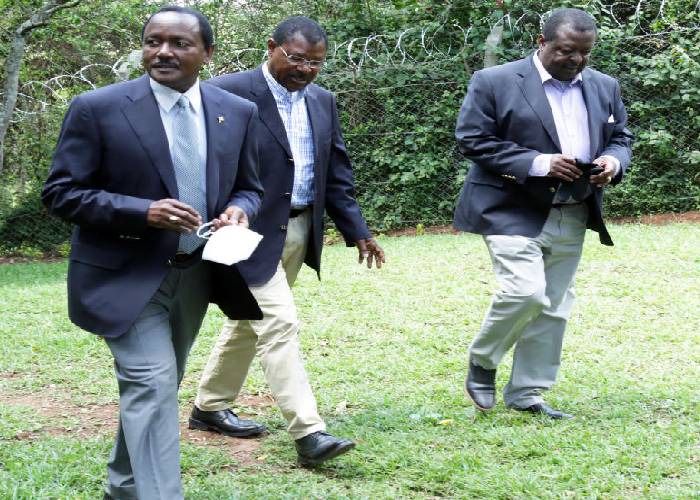 Wiper leader Kalonzo Musyoka could end up reuniting with his ODM counterpart Raila Odinga should the happenings ongoing in the One Kenya Alliance (OKA) persist, one of his (Kalonzo) allies has revealed.

This comes amid reports of disagreements within OKA, caused by attempted dominance by one party; Musalia Mudavadi's Amani National Congress (ANC).

Details indicate that so assured that he is the best man to run for the presidency is Mudavadi, that he has made it clear that he must be the alliance's flag bearer.

A senior Wiper lawmaker has revealed that they will return to Raila if this persists, adding that the only person they cannot work with is Deputy President William Ruto, another 2022 presidential hopeful.

He says that in the event that there are no other choices, they will have to help Kalonzo run alone.

"If that continues, we will leave and run separately. We can team up with Raila, we don't have much problems with him. The only person we can't work with is Ruto," the parliamentarian told The Star. 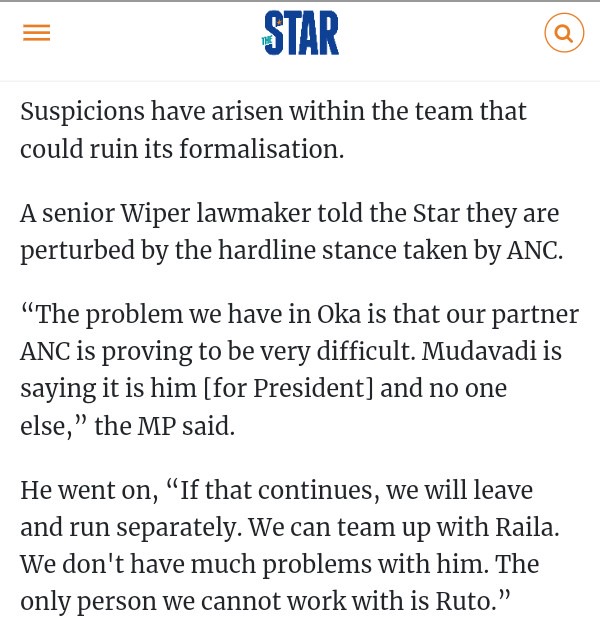 "The problem we have in OKA is that our brother ANC is proving to be very difficult. Mudavadi is saying it is him and no one else," he is further told the paper.

The same paper on Thursday reported that Raila and Kalonzo are already in talks, and are in good relationship despite appearing to be big political enemies in the public eye.

The paper added that there also are attempts to bring on board Mudavadi, who, however, is proving to be difficult and seems to think that he must be in the 2022 ballot and has all he needs to win.

Interestingly, Kalonzo is among people who have vowed never again to work with Raila, accusing him of betrayal and conmanship, with Raila's troops also branding him a coward who skipped his mock oath.

The three, as well as Ford Kenya leader Moses Wetangula, are members of the now dead NASA coalition. Mudavadi, Kalonzo, Wetangula and Gideon Moi (KANU) have now teamed up to form OKA.

The said talks between Raila and Kalonzo come after reported efforts by President Uhuru Kenyatta, who is keen on having a member of the NASA coalition succeed him as the next Head of State.

Earlier, during a meeting with Kamba leaders at State House, he reportedly said that he will support them once they unite and nominate a flag bearer.