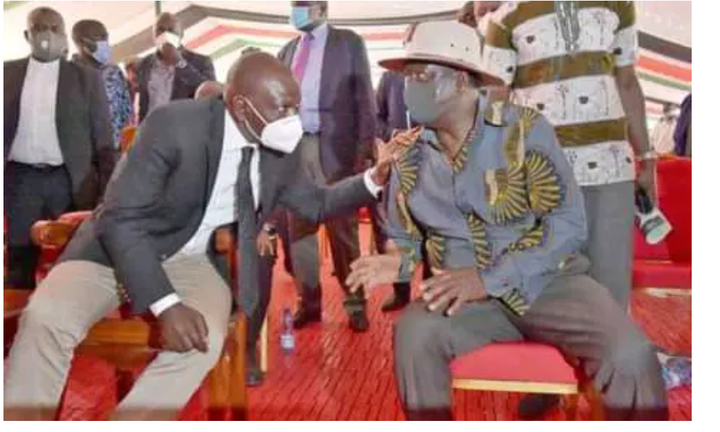 It has been reported that the number of OKA coalition members prepared to forego presidential ambitions in order to support ODM leader Raila Odinga has increased.

This comes amid rumors that four of the five OKA heads who have indicated their interest in running for the seat are under heavy pressure to withdraw their candidacy and rally behind Raila.

President Uhuru Kenyatta apparently hosted them at State House on many occasions in an attempt to persuade them.

Despite their public declarations of candidacy, recent information shows that one other co-principal has opted to endorse the former Prime Minister.

Gideon Moi, the KANU's leader, was previously believed to be alone in his support. Except for UDP leader Cyrus Jirongo, the others have publicly said that they want to remain in the contest to the end and would prefer to support one of them over an outsider.

The publication, however, excludes ANC leader Musalia Mudavadi from the list of those who have agreed, meaning that they are part of the remaining team, which also includes Moi, Kalonzo Musyoka, and Moses Wetangula.

According to a Mudavadi insider, the former Vice President is adamant about running for President again and has already began preparing.

"Mudavadi appears to be hell-bent on being on the ballot. He has assembled a team to assist him in developing and implementing his communications plan. Additionally, he has employed top-tier technocrats to establish campaign infrastructure "in accordance with the plan.

Malava MP Malulu Injendi advised the OKA leaders to remain united, expressing confidence that if they worked together, they could beat Raila and Deputy President William Ruto and form the next government.

"The stakes are so high for us in Western, and we're working hard to enlist the support of other communities for Mudavadi's presidential campaign," the MP explained.

Uhuru allegedly told the OKA team at one of his meetings that the only option for them to support the next government is to back Raila, the only opposition member capable of defeating Ruto.

Moi and Wetangula have since been officially nominated for the President by their respective parties. On December 9, Raila is set to launch his candidacy.

Saturday's Six (6) Well and Deeply Analyzed Matches To Bank On And Get Huge Returns.

Today's Top Prediction That Would Pay You Nice Cash.