The Building Bridges Initiative has faced another major threat after Nyeri county residents forced various BBI leaders to cut short their speech and flee for their lives when a group of angry youths stormed the meeting that was held in Karatina town. 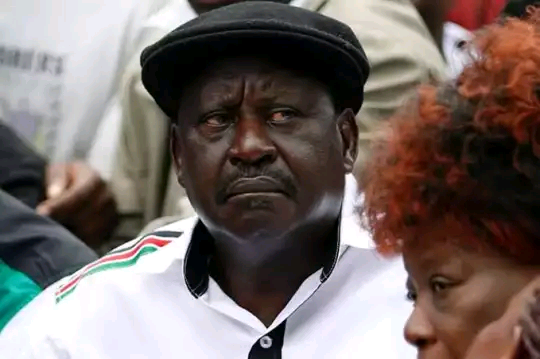 According to the video clip shared by Dennis Itumbi through his Twitter account handle, the drama started when a certain Principal Secretary started to unleash political attacks on Deputy President William Ruto, urging residents to support the BBI report because unlike wheelbarrow, it's going to bring to an end of their current problems.

Immediately, Karatina Residents started to chant Hustler, Wheelbarrow, and Ruto slogans while others started shouting in their Kikuyu Dialect, in a manner that perceived that they no longer don' t need any Constitutional amendment. 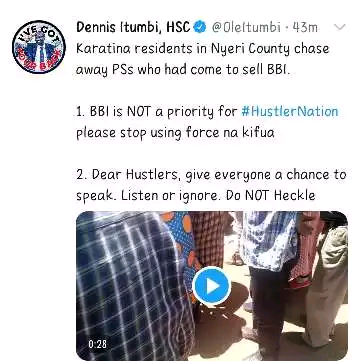 While this incident comes just hours after the Nyeri County Assembly passed the BBI Report, it' s now evident and clear that it might face an obstacle in the coming days.

In the realm of Politics in Kenya, 2021 will remain to be the simplest year ever.

Political formation have continued to require new twist, those that were once perceived as Great enemies became best friends ever and regions that were looked as if it would be belonging to some people have also broken the record with Mt Kenya Region, Coastal region and Ukambani region acting pretty much as good examples.

Former prime minister Raila Odinga has now deep himself into Politics and he has declared that he would be going for his final round before he steps out of politics.

Raila Odinga has been on a silent mood before the BBI bill sail through counties and he has now come to proclaim his position in politics. 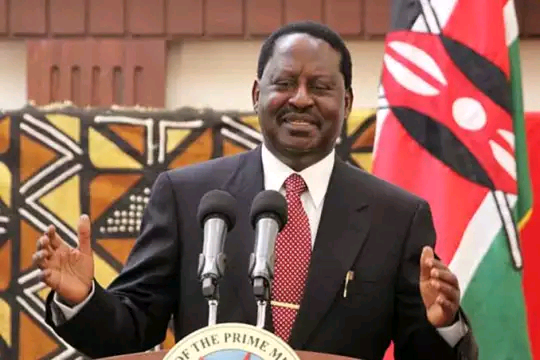 He said that he will be on the race and no one can stop him in this race.

He argued people that he will be working with president Uhuru Kenyatta who is expected to exit the office at the end of this year.

Wil Uhuru Kenyatta support him to win this race?

President Uhuru Kenyatta had already declared that he would not support anyone in 2022.

Speaking recently in his campaign he said that he would not support deputy Ruto in 2022. He argue peoples that he is aiming to make his legacy look good.

He added that when he exit his office he would leave behind a person who would unite people and not to steal from them.

Deputy Ruto has also declared that he has no debt from anyone as he campaign for 2022 election. 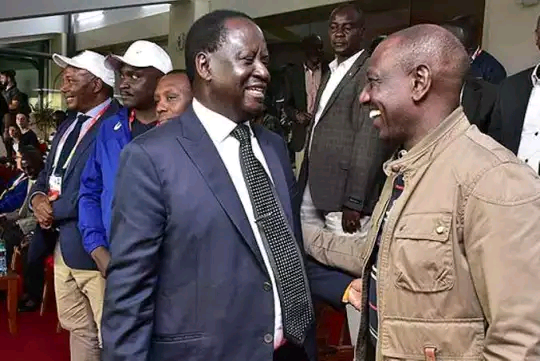 He said that he agree to support president Uhuru Kenyatta in previous election simply because he had similar agenda of keeping peace and also improving the economy of Kenya. He said he would work with God as he seek mandate from the people a head of 2022 election.

Deputy Ruto has been on the frontline to declare that it is time for hustlers to rule.

He said that the time for dynasty has elapse as he was aiming at Raila Odinga.

He directs the message to Raila Odinga that he has been in this politics for along period and its now time to leave behind for the hustlers. Will Raila Odinga steps down or he will be going for last bullet. 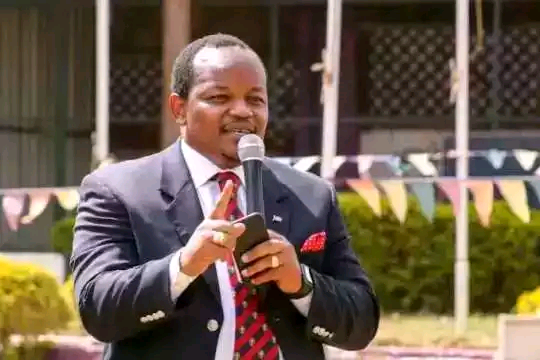 Who would have thought that President Uhuru and DP Ruto who were once best of friends and had great chemistry would end up like this?

Do you remember these two once wore matching ties and shirts?

To many it might look like Raila and Uhuru are winning but the new details that have emerged are contrary to that.

This is because the constitutional changes being pushed by President Uhuru Kenyatta and ODM leader Raila Odinga might end up being useless if Deputy President William Ruto wins the presidency in 2022, it has been revealed. 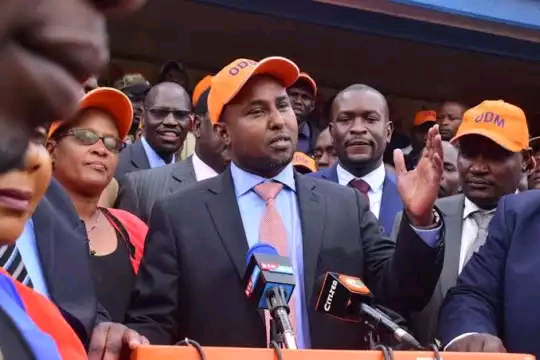 The Kenyatta and Odinga son, referred by many as dynasties seem to have isolated Ruto, who has been questioning the process, and whose allies are saying that he is indeed uncomfortable with some of the proposals because they will heap more financial burden on the ordinary Kenyan.

As a result, they have revealed that Ruto will be seeking to reverse some of the changes in the event that he wins in 2022, the plan being to return the current laws, something that will be done within months after Ruto is declared president.

Uasin Gishu Woman Representative Gladys Shollei states that the changes will be reversed within no time, hence the calm within the Ruto camp.

"There is no need to worry about this BBI because when it passes, within the 100 days of Ruto's administration, we shall launch an amendment process to weed out the contentious clauses," she is quoted by the Nation. 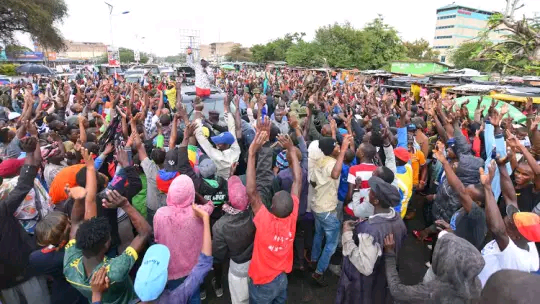 Bomet Senator Christopher Lagat said that Ruto will remain silent for now, and will not be seen fighting the changes ahead of the referendum set for June, to avoid a messy confrontation with his boss;

"It’s unwise to come out openly to face your boss; in fact, it’s us who told him to avoid at all costs, any action, which might be interpreted as confronting his boss," he is quoted.

The paper has also established that Ruto has chosen not to fight the BBI to avoid unnecessary expenditure.

His plan, it reports, is to keep his resources for 2022 presidential campaigns and use the rest in sponsoring his allies eyeing National Assembly and Senate seats.

The fact that ODM leader Raila Odinga will not run for the presidency in the 2022 general election was one of the agreements between him and President Uhuru Kenyatta before his 2018 truce, is now emerging.

Emerging details indicate that this is why the former prime minister was silent on whether or not he would participate in the presidential contest, with new details now suggesting that the issue was discussed prior to his handshake with Uhuru. .

The Star has established that Uhuru is still looking into the matter and is keen to ensure that Raila is not left on the sidelines, this appears to be one of the topics that was discussed when he and Raila met with 5 other high- level national leaders on Thursday.

Sources told the newspaper that if the leaders; Raila, Uhuru, KANU leader Gideon Moi, Moses Wetangula (Ford Kenya), Charity Ngilu (Nark), Musalia Mudavadi (ANC) and Kalonzo Musyoka (Wiper) approved the meeting as a meeting on the referendum issue, the issue of 2022 was also discussed in depth.

"The leaders are planning the 2022 succession.

There will be horse exchanges and riots, but ultimately they will decide who becomes president," a senior state official told the newspaper.

This statement was shared by political analyst Martin Andati, who said the meeting was purely political and was more about the 2022 succession than about the Building Bridges Initiative (BBI).

For him, the fact that Moi read the statement on behalf of the other leaders was to show Vice President William Ruto that he found himself to be his replacement, now that he has had a fight with Uhuru and is fighting with almost all the leaders present. .

"If you look at the succession matrix, Ruto has been sidelined and Gideon is turning against him, " the commentator said.

Ruto is seen as the biggest threat to Uhuru' s presidential endorsement in 2022, and he has since announced that he will stop at nothing in his bid to rule Kenyans once the president' s second and final term expires.