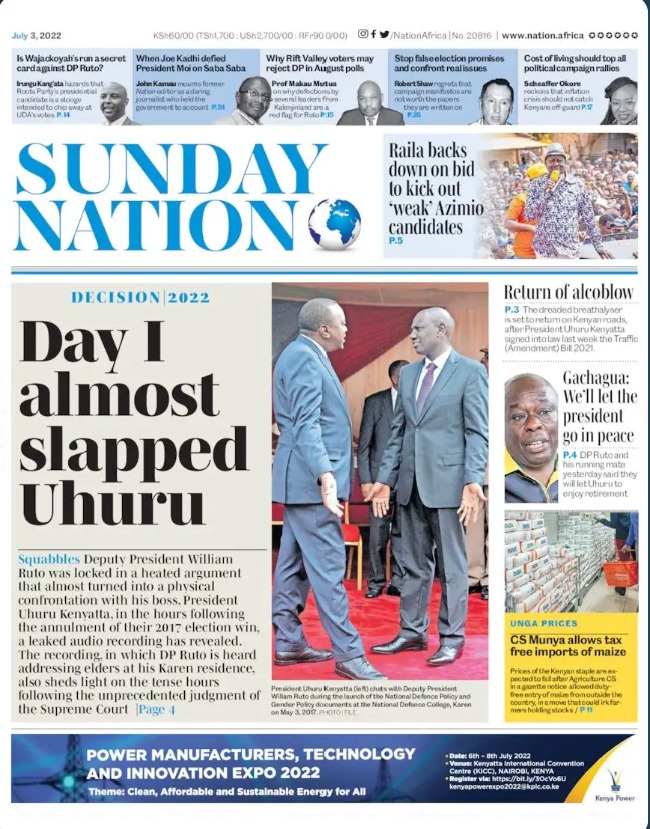 Deputy President William Ruto's office has reacted to a publication by the Nation Media Group on Sunday, July 3. The Daily Nation had: "The Day I Almost Slapped Uhuru" as its headline.

In the story, the writer reported that the incident happened soon after the Supreme Court nullified the presidential election and Uhuru wanted to give up on the repeat poll.

He added that the Kenya Kwanza Alliance presidential candidate made the revelations about the likelihood of his argument with President Uhuru Kenyatta getting physical in a meeting at his official Karen residence where he hosted the Council of Elders on Friday.

Ruto's Campaign Secretariat and Director of Communications Hussein Mohamed penned a letter to the Nation Media Group today evening complaining about the media house being biased and misrepresenting facts in order to drive a certain narrative.

"The headline and subsequent story written by the Sunday Nation is a continued attempt to evade reporting on revolutionary policies in the Kenya Kwanza manifesto and intensify your biased framing of Kenya Kwanza Alliance.

We note with concern the Media House's agenda to distort facts and also publish fabricated and imaginative stories," the letter which was sent to the Chief Executive Officer, Nation Media Group, Stephen Gitagama read in part.

Hussein asked the media house to declare its inclination to one side of the political divide instead of acting neutral but acknowledged the freedom it has to support any faction.

The Kenya Kwanza Alliance has in the past claimed that the Kenyan media is biased and even vowed to boycott the presidential debate that is slated for later this month.

The Media Council of Kenya however disputed the claims noting that the stations are merely following the political tide and covering with utmost neutrality. This is despite the fact that the recently released research conducted by MCK showed that Raila got 61 per cent coverage while his deputy got 78 per cent against Ruto's 32 per cent and Gachagua's 21 per cent.

Presidential Provisional Results As At 4PM