1. Wealthy people put their money into investments before spending it. After spending the majority of their money, poor people preserve it.

2. Wealthy people devote a significant amount of time and money to personal development. Poor people waste the majority of their time and money on useless purchases or activities.

3. Wealthy people expect to be financially independent for the rest of their lives. Retirement is something that the poor look forward to.

4. wealthy People have a unique perspective on life. Rich people prefer solitude to conspicuousness to keep everything hidden from prying eyes. Poor individuals proudly showcase their material belongings for all to see. They even post pictures of their cash on social media, in publications, and newspapers.

6. The wealthy adopt a more strategic and investment-focused strategy. They would rather think before buying than spend on impulse, and they would rather do the math before purchasing. Poor people have a spending mindset. They have a hard time resisting the urge to acquire everything fancy they come across on impulse and then worry about it later.

7. Rich individuals have a unique perspective on life. For starters, they don't want to be perceived as wealthy. They would rather remain unidentified. They will rather delay gratification for the sake of their progeny and future generations. People who are poor wish to have everything right now. Even if it's something they don't require.

8. Rich people have a unique way of thinking and approaching life. They approach to risk with a distinct mindset to determine how much danger they're willing to take about the potential reward. Poor people approach risk uniquely. They view risk as something to be avoided at all costs since they are unwilling to lose any money. They consider failure to be an embarrassment, terrible luck, and unacceptably awful luck.

9. The mindset of the wealthy is that of an entrepreneur. They see life as a never-ending adventure full of possibilities. Poor people have an attitude that is similar to that of an employee. They would rather have the security of a monthly income despite a demanding 9-to-5 job and an early retirement than go on a dangerous entrepreneurial path riddled with uncertainty and risk.

11. Because they comprehend the true meaning and benefits of assets, wealthy individuals purchase them. Rich individuals believe that possessing an automobile is a liability unless it is used to generate income. Because they have a different viewpoint and understanding of assets and liabilities, poor people buy liabilities. Owning a car is seen as a big asset among the poor.

12. Wealthy people carefully select a few wealthy friends. Poor people make as many poor pals as they can.

13. Owning a long-term, sustainable business is a source of pride for a wealthy person. A poor person's pride is to flaunt as much money as possible, as well as as many material belongings as quickly as they can acquire them.

15. Rich people do not purchase items solely because they are on sale. Instead, they invest in equities companies because the prices have decreased. Poor folks go on a shopping spree, buying things they don't need at a bargain, without realizing they're still wasting money. 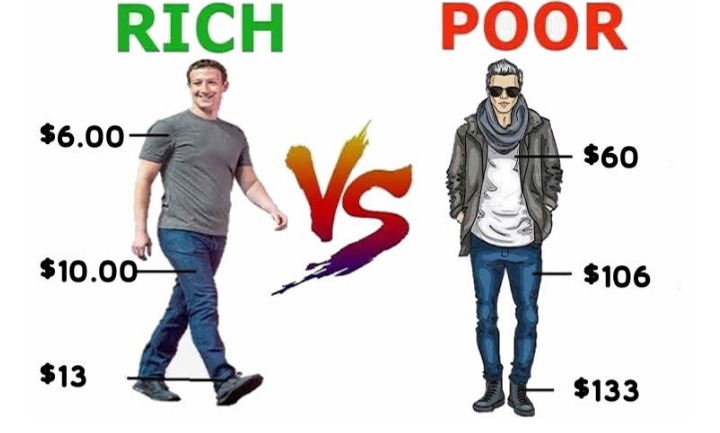