Hard lessons From R. Kelly: Your Kids Could be Facing Abuse Right Under Your Nose

By Karadernews (self media writer) | 19 days ago 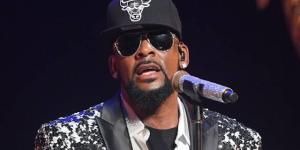 When I was little, my mother had a circle of friends, a little tight and loyal. Perhaps, seven, or eight women all about the same age.

They would meet every Sunday, after church service. They would visit each of the member's home on a rotational basis. It was some sort of a lady's chama - before they became so mainstream. They would sit on the lawn all afternoon, deep into lady talk - sipping tea.

The tea, well, had better not be in short supply. Every member had a gigantic flask - for these meetings. Mother did one better, she had two mammoth flasks - she was the treasurer. Status demanded it. She had clout - a cousin had then flown in from the UAE, no less.

One Sunday, it's our turn to host. Mother had her chatty lady friends. I had a whole gang of kids in various 'levels of snob and spoilt-ly' to look after. In between, I'm running little errands - mother would often call out: Bring Mrs. T the album, bring the little notebook on my dresser.

She asks me for the other tea flask. I lived for this moment - it was a 'grown up' moment, right there. No kid would be allowed to handle the fragile treasure. The women in that group all owned one to their names, so, for a refill - it would have to be carried to the kitchen.

The little things mattered. We were 'deep state' - mother would just bring the other flask.

So, deep in a rounders game - you know the game, right? It's a little like baseball, only more interesting. Well, I hold up a hand to pause the game, and announce to my gang: I need to go for the flask, guys.

They would look up at me - I was a tad lanky for my age - and I could read envy in their eyes.

I get to the kitchen. The other flask is empty. Well, am grown up, right? I pick up a jug from the rack on the wall, starts filling it up. There's a huge pot, bubbling hot tea.

No, I don't get scalded, or anything. I do not drop the heavy thing on the long trek back. I could see mother visibly give a sigh of relief. It was a huge gamble she had just taken.

Well, I get back to my friends. The game goes on. Then, we switch to hide or seek, or something. The women are still sipping tea.

A while later, intense gaggling sounds - no, sounds of collective gaggling sounds. I relunctantly crawl from beneath a rose bush. I was winning that day's hide and seek - I had home advantage. I glance over at mother, and her friends.

Mother is half-standing, staring at something she's holding with two fingers. She's pushed her horn-rimmed glasses back - high up her nose. It's not a good sign. She's furious, her chest heaving up and down.

It was an ageless, filthy nylon rag she used to clean utensils. I hadn't checked the flask before refilling it.

The women had sipped the tea to the bottom of the flask - and, Dear Lord, the ugly rag had popped out in the last of the refills.

That was the last meeting the group ever made. My mother's reputation was in tatters. We had to change church. If her bank account had her wherewithal, we'd have moved to a new estate.

That's what comes to mind when disgraced RnB star, R. Kelly, comes up in a conversation. Bitter-sweet. It brings nausea, like someone who's had too much of raw honey. It's sweet, and slurpy - but makes you sick.

Well, you got to know R. Kelly. A lot of 90's kids grew up on a religious staple of his music - I Believe I Can Fly. I Wish. Ignition. I'm Your Angel. He was a lyrical and vocal genius. Easy to love - at first. He'd come across in interviews as charismatic, funny, deeply caring - 'hard not to like him'...

He'd earn a media tag as the 'Pied Piper of RnB' in the true fabled Pied Piper fashion - he'd attract the young people, to follow, to admire, to idolise.

Except, the star R. Kelly fans loved and adored had a darker side. He had a fetish for underage girls. It has ultimately led to his crash from R&B legend status, to total shame.

Musician R. Kelly was first arrested in 2002 and charged with 21 counts of child pornography. In 2008, a jury acquitted him.

In an interview after his release, a journalist asked if he liked teenage girls. He'd asked the journalist: "When you say teenage, how old are we talking?"

There's a hurting bevy of his victims - former dancers, back up singers and fans - who describe themselves as 'Survivors of R. Kelly'. It's packed with emotion, that phrase. The singer would entrance young girls as low as 14, 15 or 16 - already smarting from his celebrity glow and he'd sexually exploit them.

While R. Kelly destroyed many lives, none hurts more than an illicit, abusive relationship he nurtured with his musical protege - the late Aaliyah.

He had met Aaliyah while she was only 12. She was just a kid, then - shy, tomboyish, glasses, and, wait for it, braces. He had noticed her vocal gifts, taken her under his wing. She had become a star. R. Kelly produced her first album, released in July 1994. The 'Age Ain't Nothing But A Number' album.

The message was right there, in plain sight - no one read it.

He would later get Aaliyah in the family way. To cover it up - they got married. He was 27, she was 18. Except, she wasn't 18. Aaliyah was 15. He had forged documents. A public outcry resulted in an annulment of the marriage 4 months later.

Shortly after, R. Kelly revealed that he had endured an abusive childhood. He led a childhood cooped up in recluse, tapping his keyboard. These experiences had wrought up a monster.

Psychologists say that a victim of sexual abuse confuses power and control with sex. Then the victim grows up, and thinks: "I want to be the one that's in the power position. I don't wanna be the victim anymore...." An abuser is created.

R. Kelly goes on to say: "As a kid, I had lots of secrets. Some were terrible, some were beautiful. Some were both. One secret was what was happening to me at home."

The abuse. Someone close to him was his abuser - a family member. It was a full household, notwithstanding. R. Kelly grew up with three brothers, one younger, and, a sister. No one had noticed anything off. Not even his mother could tell that the kid was being molested. He was abused from age 7, to around 14. That shaped him.

The tragic R. Kelly fiasco is faraway - halfway across the globe, or, perhaps, could be happening right in your home. Right under your tight work schedules, night classes and meeting boys at the local after work.

Have you been paying attention to the teen in your household?

Check on them. Abuse may be closer than you think.