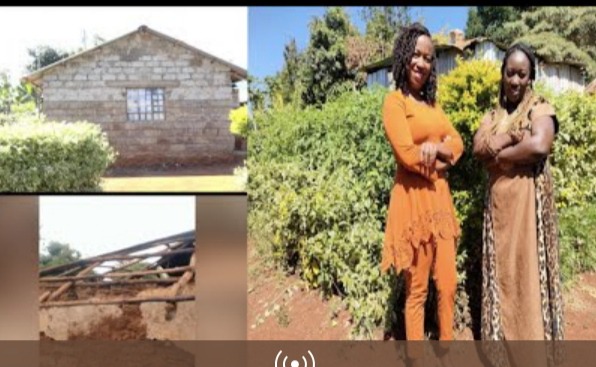 Njoki was raised in a modest household by her single mother, who worked extremely hard to raise them. Because her mother couldn't meet her needs, she decided to leave school while still in form 2. She was hired to work as a housekeeper after finding a job. With the money she received ($5,000), she was able to pay her mother to move the other kids out of the house.

Njoki returned for her to take care of the child after becoming pregnant a year later. She used to work on coffee farms to provide for her child's needs. Although the work was exhausting, she had to care for her child.

She was able to care for the child for up to a year before deciding to move to Saudi Arabia in search of "greener pastures." Her main reasons for her going to Saudi Arabia was to;

1. Build her mother a nice house because the previous one was falling. They had lived in a mud house for the longest time in her life.

2. She is also determined to take her child to a nice school and have a good education more than what she learned in school.

3. She also wanted to help her mother raise the other siblings who were also at school.

Njoki spent nothing because her agency took care of everything. She worked for a huge family in a Saudi Arabian home. With their grandchildren, the family numbered over 20 members. Although the entire experience terrified her, she chose to continue since she wanted to work.

She, fortunately, met a Kenyan employee of the residence. Unfortunately, she was misled by the Kenyan in everything she did. Njoki, a Kenyan, never learned Arabic, hence he consistently misinterprets every bit of information.

Her boss also never gave her food. According to Njoki, the refrigerator was constantly empty, and what was left over was kept in the employer's bedroom. Njoki was constantly peckish. Luckily, she made it through on strong tea. Her profession required her to wash, iron, cook, and clean the house, which made life difficult.

Njoki further notes that due to the amount of sugar she consumed over the month, her manager had to take a deduction at the end of the month. Months later, when she was unable to preserve it, she decided to tell her agent, who graciously permitted her to work in a different residence.

Because the family was smaller after the move, life improved. Her only issue was that the family enjoyed going out. They always helped her along the way, so Njoki continued to work there as a housekeeper. And because she was never paid, she chose to stay in the house rather than take on more employees.

Her supervisor did not like the concept, so she started treating her badly. She didn't even provide her with a phone so she couldn't call her family at home, and she began paying her salary late. She was, fortunate,l y able to return home safely after the contract.

All her money was wisely used by her mother where the main project was to build a house. Luckily all this while Njoki never saved anything because she wanted to change the lifestyle of her family with the little money she earned. Through determination and sacrifice, she was able to accomplish her dreams.