15 Of The Most Ridiculous Jerseys In Football History. (See Man United And Barcelona)

By MOSES_GITU (self media writer) | 27 days ago

Sometimes the intention to innovate ends in great disappointments. 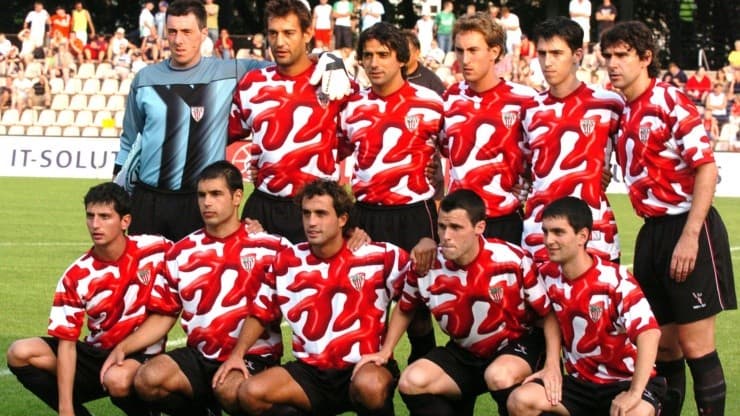 For years, national soccer teams or teams have wanted to put their classic jersey designs aside to make way for new outfits. However, they have not always worked and, in many cases, they have even been ridiculed . Of course, everyone has their opinion, but in this list we have put together shirts that really attracted attention every time they were worn. And, for the most part, not for the better.

There is no doubt that colors play a fundamental role in these cases, although many of those that we will mention below were criticized mainly for their strange designs .

There has surely been worse apparel than the ones on this list, which is why we present 30  of the most ridiculous jerseys in football history . 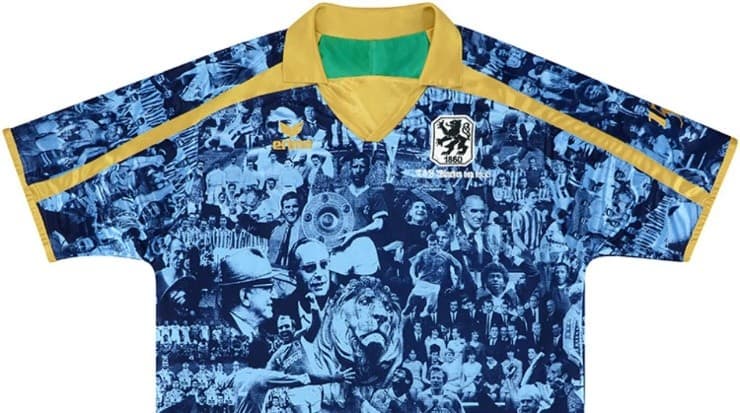 For the 150 years of its founding, the German institution launched this design. Source: @ tsv1860

Due to the 150th anniversary of the German club, 1860 Munich took the design of the well-known Teutonic Oktoberfest event and, in 2010, released a special shirt with many historical images of the German team throughout. 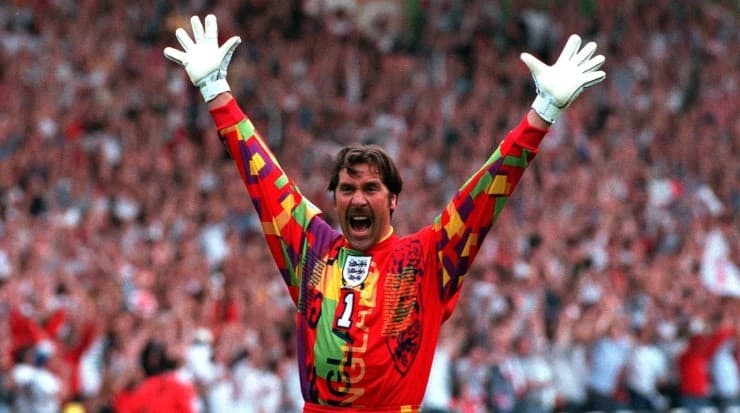 He used it during the 1996 Euro Cup. Source: Getty Images

This position is more precisely for David Seaman, recognized Arsenal goalkeeper in the 1990s. However, it was in the 1996 Euro playing for the England National Team that he used this more than strange outfit.

The truth is that they could have left the outfit completely red, but they decided to add colored figures that undoubtedly did not improve the shirt. 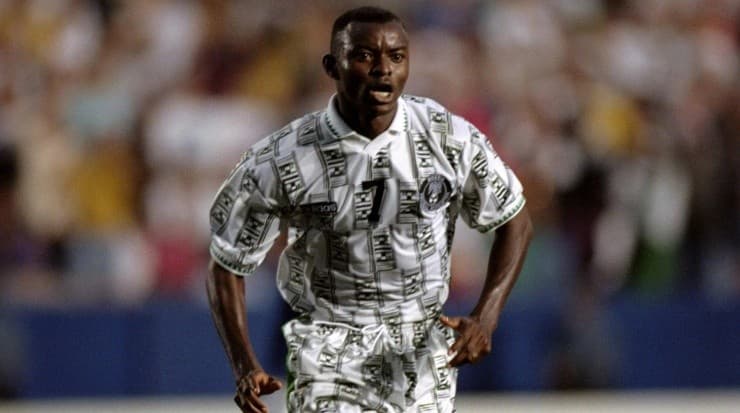 Believe it or not, this was Nigeria's alternate jersey. Source: Getty Images

The Nigerian National Team entered the 1994 World Cup in a true-to-style green jersey. However, when having to use an alternative clothing, the appearance of it surprised more than one.

The most striking thing was that the set was complete, although on some occasion they also combined the shirt in the image with green pants. 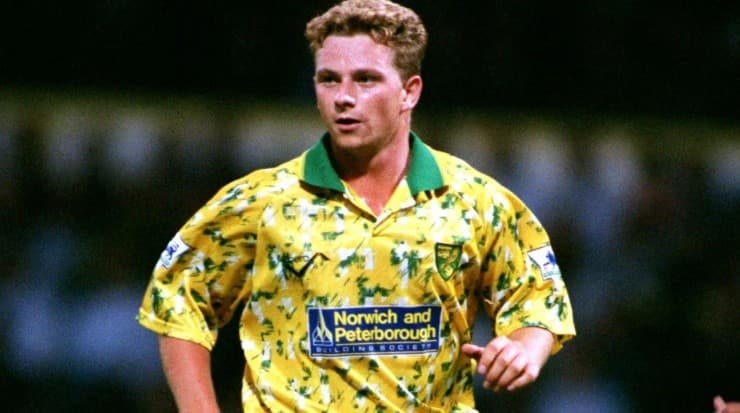 Not satisfied with their first release, they made a similar model years later. Source: Getty Images

The Premier League team hit the mark in the 1992/1993 season by competing in an impossible-to-ignore jersey. Its fluorescent yellow and green made the outfit one of the most ridiculous in the major leagues in the world.

The funny thing is that, in 2016, the club launched a similar model, albeit with a white background. The criticisms were not long in coming. 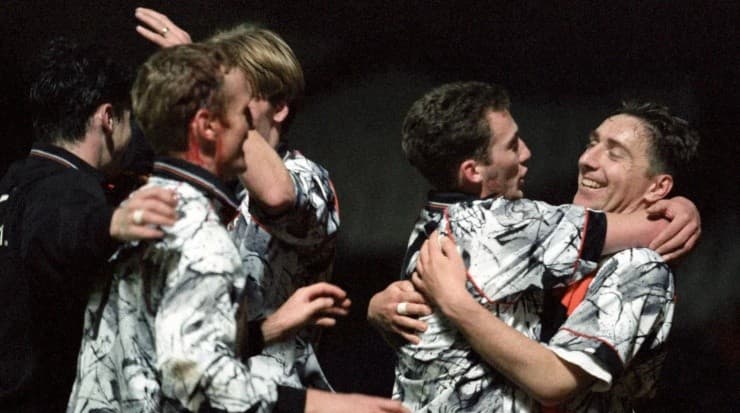 This design was used in the early 90s and it was very striking. Source: Getty Images

The Scottish cast, one of the oldest Scottish clubs in the local league along with Celtic and Rangers, wore an alternate jersey that featured a handmade design during the last decade of the 20th century.

During those 10 years, the team in question won the 1994 Scottish Cup, descended to the following season (1995), returned to the first division in 1996 and fell in the final of the Scottish league cup in 1998. 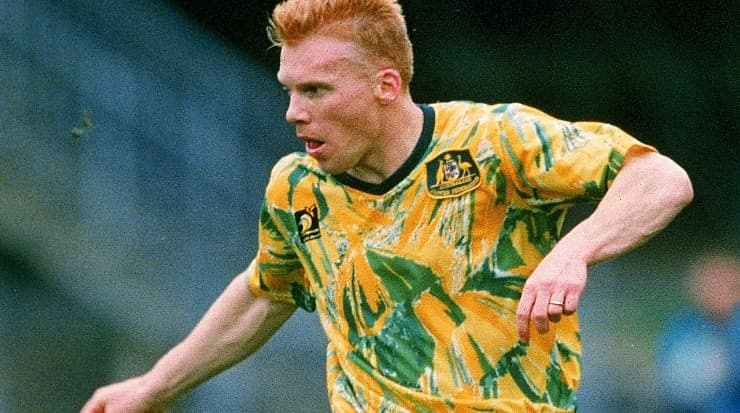 They went overboard with the intention of innovating. Source: Getty Images

The Australian National Soccer Team, or the Socceroos, couldn't qualify for the 1990 World Cup, but they made headlines for another reason: their new jersey.

The intention of maintaining its classic colors such as yellow and green, and their derivatives, was maintained. However, the design was, to say the least, eye-catching. 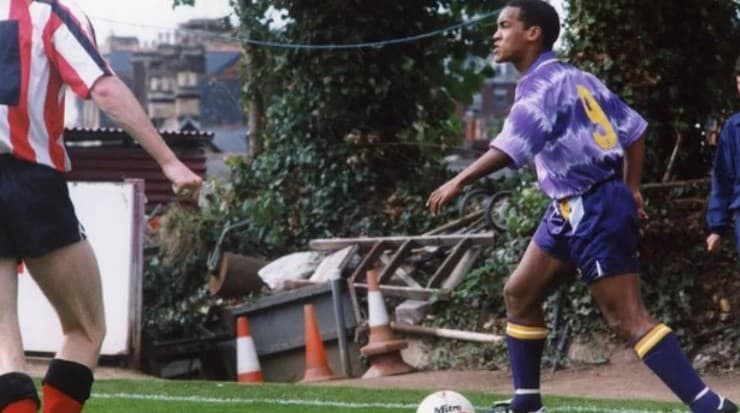 The designer of the purple shirt turned out to be a sound technician. Source: Getty Images

Coincidences of fate or not, the designer of the Stoke City jersey was also a sound technician and, believe it or not, the final pattern of the jersey shows horizontal white lines on two different shades of purple.

From 1992 to date, neither the original idea nor any style of shirt similar to that used by the English cast last century has been repeated. 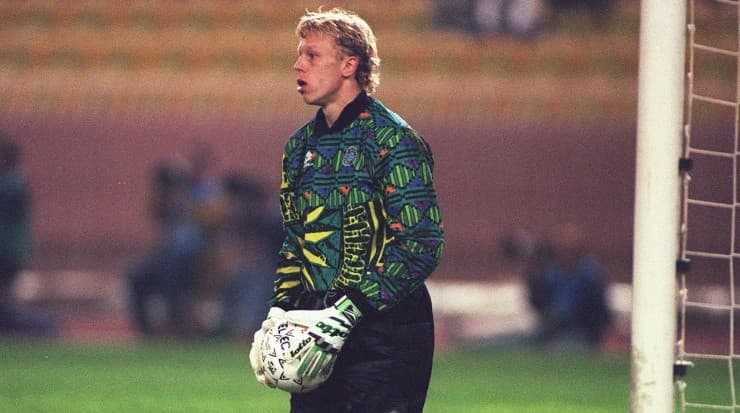 They looked like two T-shirts in one. Source: Getty Images

Without a doubt, one of the rarest on the list. It was used by Mart Poom, goalkeeper of the Estonian National Team, during the 1998 World Cup qualifying games. The design says it all.

It is already very strange, but the most striking thing is that they look like two shirts in one. If you look closely, you will notice that the drawings are cut almost in the middle of the torso. 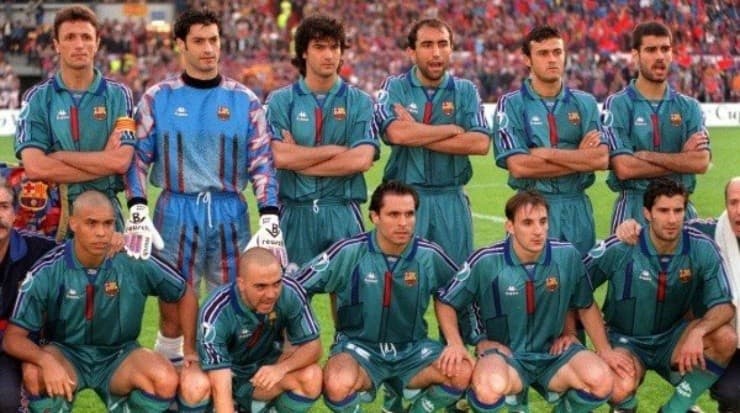 With Van Gall as coach, the culé cast began to innovate designs in the substitute shirts. Source: Getty Images

At the end of the 20th century, prior to the heyday of social media and cutting-edge technology, what was in style was the designs on the substitute jerseys of elite teams internationally. Barcelona was no stranger to es and in 1997 it innovated its alternative model with an unusual format for its rich football history that raised doubts among the fans.

Players from Ronaldo's class, Luis Figo, Luis Enrique and Josep Guardiola were forced to wear a vintage-style T-shirt, which was far from the regular and traditional Barça with vertical batons. 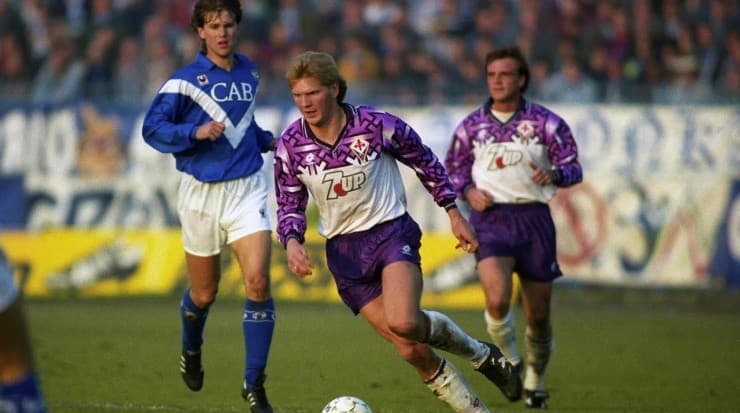 In the early 90s, the Florence team wore a shirt that was as striking as it was controversial. Source: Getty Images

Without a doubt, the shirt with the greatest political, cultural and warlike significance is the one worn by the Fiorentina players in 1992: that outfit featured an unusual and incredible design that brought hatred and racism worldwide, the swastika cross of origin Nazi on men and sleeves.

Viola de Firenze had in its ranks the Argentine striker of the moment, Gabriel Omar Batistuta, the Danish Brian Laudrup and the Swede Effenberg, who dressed it until the club had to remove it from circulation and redesign a second emergency edition due to the controversy that caused the aforementioned geometric figure in Italy and Europe. 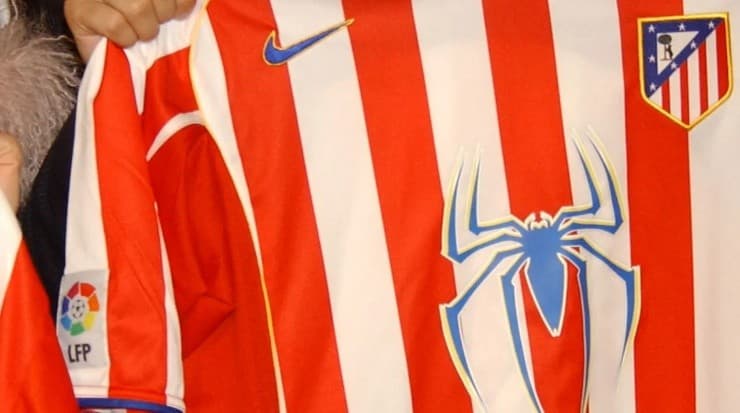 By signing with a famous producer, the Colchonero had to add the Spiderman 2 symbol to the front. Source: Getty Images

Due to a signing, prior oral agreement, with the well-known American content producer Columbia Pictures, Atlético Madrid owned its regular and alternate T-shirts with the symbol of the hit movie Spiderman 2 during the 2004 season.

Uncommon in professional football, the Colchonero made a move that caused indifference and different opinions among fans of the Madrid team because this unexpected design is one hundred percent dependent on money. 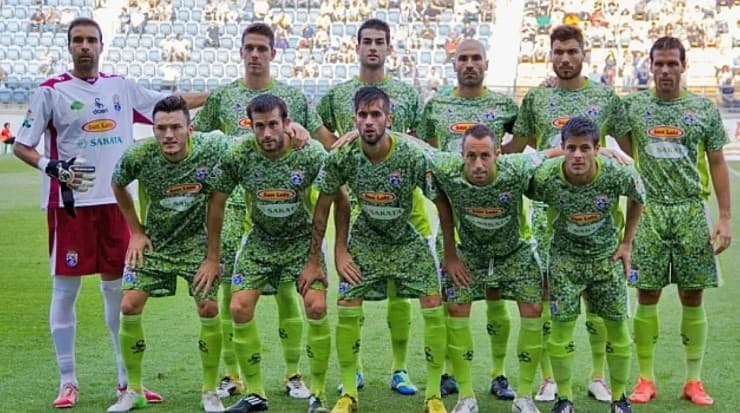 Broccoli fans, in Spain there is a club that showed it in promotion football. Source: Getty Images

Like Bedale, the other outfit that linked a shirt in official matches with a food is the modest La Hoya Lorca, who is known as the Mechanical Broccoli for wearing a fully designed shirt from said plant.

This decision of the directive committee of the Spanish Second B team at that time was given primarily by its main sponsor. 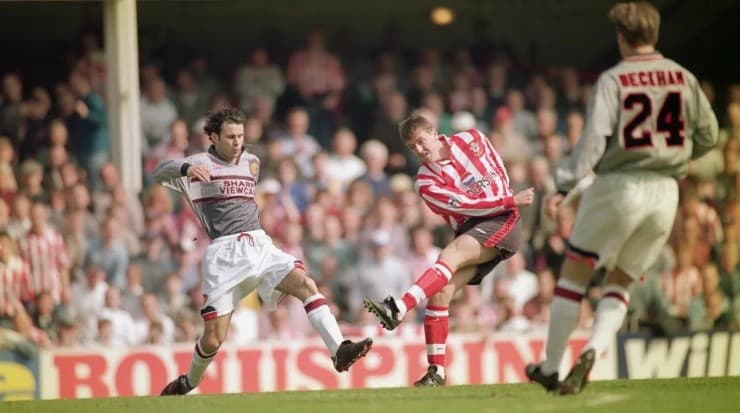 Ahead of the glorious and unforgettable era of domestic and international cupping and triumphs, Manchester United wore a controversial design shirt up front for a period of only 5 games in 1996.

In addition to never winning, former Scottish coach Sir Alex Ferguson gave his totally negative view: "The players couldn't distinguish from each other; they said it was difficult to see their teammates from afar when they raised their heads." 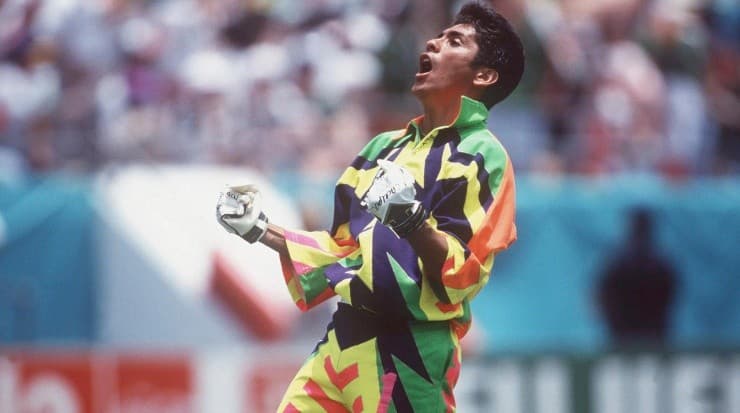 He designed his clothes himself. Source: Getty Images

It is not about the Mexico National Team in its entirety, but about one player in particular. And there is only one position that differs from the rest: that of the goalkeeper.

Without a doubt, Jorge Campos did not go unnoticed during the 1994 World Cup, in which he competed wearing a very colorful and strange outfit. The most curious thing? It was he who designed the shirt. 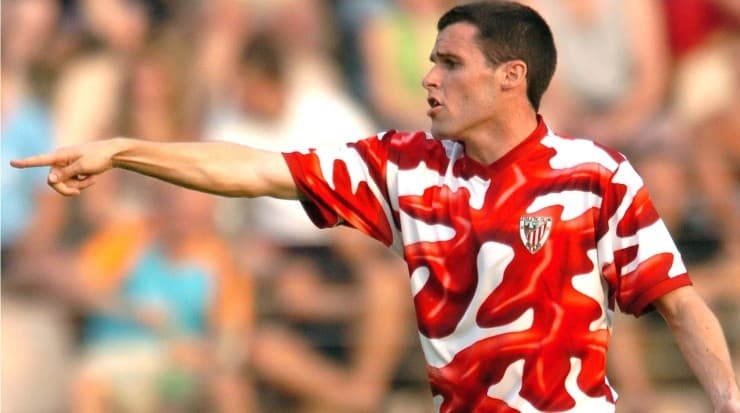 It was known as the ketchup shirt. Source: Getty Images

The idea came from the Basque artist Darío Urzay, who wanted to keep the team's classic colors, but without the vertical stripes. As you can imagine, there were opinions of all kinds, although most of them were negative. Even UEFA came to call it "Ketchup shirt" (ketchup shirt)

The painter decided to take away the rights to the club in October 2004, a few months after launching it, since the directors of the institution never communicated with him.