By Shahhhh (self meida writer) | 28 days

The wife of the police officers who allegedly murdered himself acted killing his lover has come clean or rather reacted to the ongoing case Revealing her last moments with her husband. In a report that has been given by KTN news, Joyce revealed that the suspect who has been identified as Benard Sivo allegedly called her moments after murdering his lover revealing to her that the deceased was one of the women who was disturbing his marriage.

"He called me and told me that he had murdered the woman who was allegedly disturbing our marriage and in as much as I tried to talk him out of it he told me that he can kill me too and it's only that I had his children that he couldn't do it", She said.

According to the reports given by Joyce, she revealed that at one time, he allegedly pulled out a gun and ordered them to go inside the house saying he could kill them if he wanted to.

While reacting to this incident, one of the senior police officers who responded to the incident after being alerted by one of the locals revealed that the suspect had been allowed to go home since he was on his off time.

However, he would allegedly use this time to go and kill his alleged lover by shooting her several times. The two allegedly had a heated argument at the the club after which he beat the deceased Mercilessly before following her to the hospital where he shot her over 15 times.

In a report that has been given by one of the colleagues of the deceased, they claimed that the officer was always drunk and wouldn't listen to anyone to the point where he had to be summoned by his seniors several times.

"I've been called by these two individuals on countless occasions in a move that was meant to let them go their separate ways. Nyamira told me that he wanted to leave the officer But it's like he didn't agree and that's why he shot her" he said. 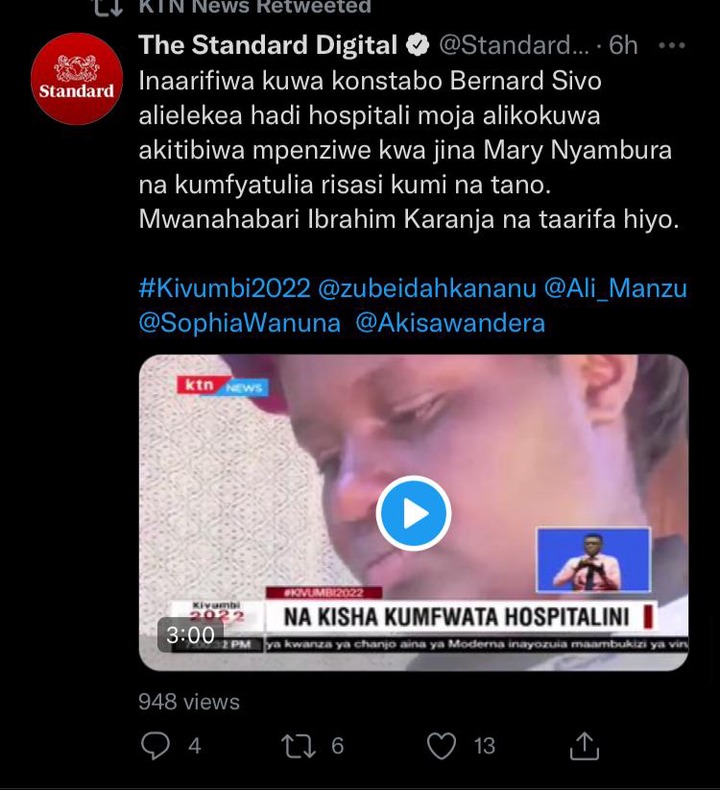