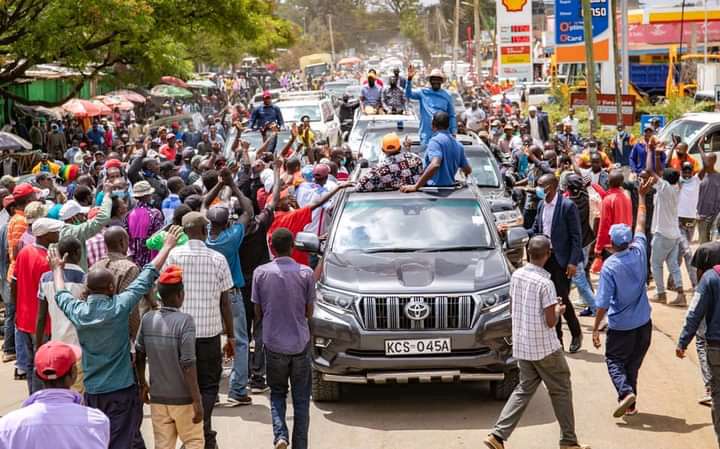 Raila today rubished the claims by Ruto' s allies that " Kazi ni Kazi" as a charged crowd danced to his political tune " inawezekana" While speaking with Laikipia residents, the former prime minister rubbished the Ruto' s wheelbarrow initiative as he termed it as rubbish.

While speaking to hundreds if crowd who attended his rally at Laikipia, the charged crowded bursted into Raila' s tune ' inawezekana. The former prime minister stated that he key agenda is to reform the economy, stop corruption and uplift the living standard of people in the country.

While addressing the charged crowd, Raila urged the residents to desist from the Ruto' s initiative of " Kazi ni Kazi" as he stated you can' t give graduates and PHD holders to push a wheelbarrow as he termed it as dead initiative.

The former prime minister charged the crowed to dance to his political tune of " jnawezekana" as governor Mureithi added that Raila has already formed the government.

While addressing the locals, Raila promised to continue with an agenda to improve the living standards of the people through his three point agenda. While speaking during the rally, the Laikipia governor also charged the crowd making them to distance themselves from Ruto' s initiative as they termed them as " takataka" that Kenyans should not listern to.

During the Odinga' s speech at the rally, the locals chanted in Odinga' s slogan " inawezekana" as they vow to support Raila up to the ballot in 2022 polls.

During the rally, Raila urged the leaders and the locals to register in large numbers to ensure they defeat the devil opponents who are only intrested in to rob the kenyan people.

Mr Odinga further added that the best way to stop corruption is through electing him and ensuring they register in large numbers and Vote come 2022 election. Do you believe with Odinga' s statement? Kindly share your views?