By CrimeBuster (self media writer) | 18 days ago

A Rogue boda-boda operator has been found guilty of murdering his neighbor's daughter after the prosecution presented a number of evidences that were found in his house.

A few years ago, the body of the deceased is reported to have been found dead days after she had been reported missing by her family members who filed a missing person's report at the police station for more investigation.

According to the reports given by the family of the victim, they revealed that she allegedly disappeared after being sent to go and buy something from the shop and it was after their search failed that they decided to involve the police.

Their search came to an abrupt end after the girls body was found in dumped in a Thicket by one of the neighbors who immediately alerted the police along with her family.

Giving her side of the story, the mother of the deceased revealed that she allegedly saw the suspect talking to her daughter prior to her disappearance.

"They did not talk often but on that day, i saw him talking to my daughter which was unusual because my daughter didn't use to talk to people easily", she claimed.

However, since this was not enough, the prosecution worked hand in hand with police officers from the regio'of who were able to find a number of evidence in the man's house.

According to the reports given by the prosecution team, they claimed that they were able to find blood stains in the man's house along with the foot wear of the deceased. 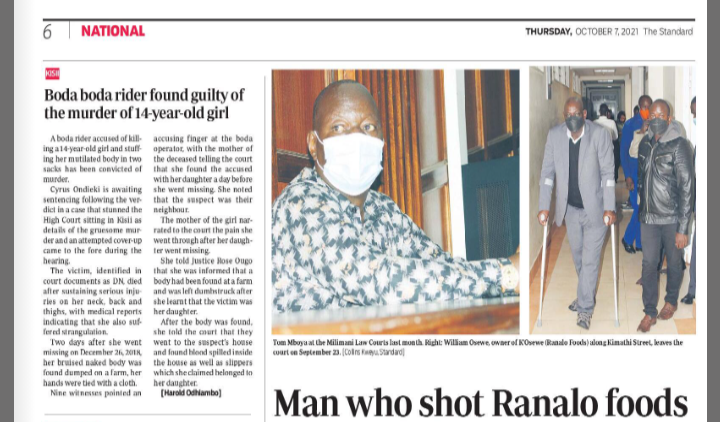 Giving his judgment, the judge revealed that the evidence provided to him was enough to sentence the suspect, he however postponed his ruling for a few days. The government Pathologist revealed that the deceased was defined several times before being murdered by her killer.