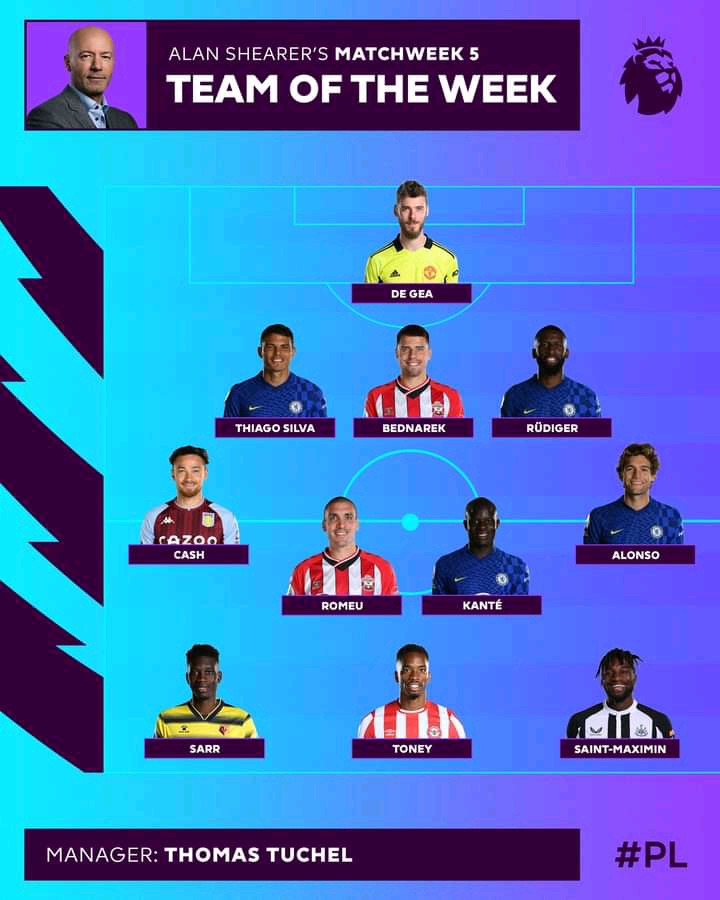 The English Premier League has Released the team of the week for Matchweek 5 compiled by Legendary Striker, Alan Shearer. The EPL Matchweek 5 witnessed a lot of interesting Football particularly on the London Derby between Tottenham and Chelsea Which the Blues won Comfortably with 3 goals to Nil.

As Expected it was the Chelsea team who Dominated the team of the week with four players making it into the team. Chelsea's Goal scorers, Thiago Silva, Antonio Rudiger and N'golo Kange all made the list alongside Marcos Alonso who was really Tremendous all through the Game.

Southampton were able to hold Pep Guardiola's team to a Goalless Draw and to do that, their players were on superb Form and the hardwork of two of them was rewarded with an Inclusion into the team of the week. The players includes Romeu and Bednarek.

Last Minute hero of the game between Manchester United and WestHam United, David Degea was included after his Last minute Penalty save handed United all three Points. His team Mate, Cristiano Ronaldo who made it to last week's team of the Week was excluded despite scoring his 3rd Goal in 3 League games so far.

Surprisingly, No Liverpool player made The list Despite their Impressive Display against Crystal Palace last Saturday.