By WikiLeaksKE (self meida writer) | 24 days

It has now emerged that a youthful man who on Saturday died in a police cell at Pangani Police Station had been charged in a court of law and slapped with a fine of Sh200, which he failed to raise.

Robert Mureithi was arrested a few days ago for breaking curfew rules and when he virtually appeared before a Makadara Law Couty on Friday, he was slapped with a fine of Sh200 or serve one week in prison.

He failed to raise the said amount, forcing officers to lock him up, only for him to pass away a few hours later.

“The deceased was arrested last week for breaking curfew rules, he appeared in court for a virtual session at Makadara Law Courts on Friday around 3 pm and had to be returned to the station,” Starehe police boss Julius Kiragu told The Standard 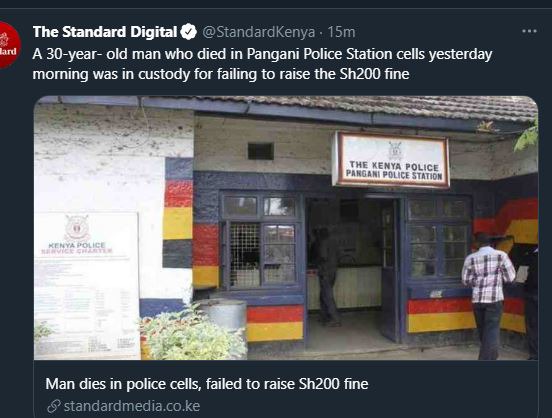 The publication reports that Robert collapsed while inside the cell at the station but the cause of his death remains a puzzle to be unravelled.

Police have also confirmed there was no kind of fights in the cell.

The deceased's body has been taken to City Mortuary for postmortem to determine the cause of his shocking death.

8 steps on how to buy stocks in Kenya

Photos: Tangatanga Leaders Dons in Yellow Colours as They Start Arriving at Ruto's Mansion in Karen