Succession Dilemma. Who Will be the Next President?

By kambramint (self meida writer) | 26 days 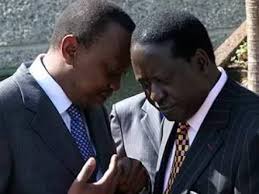 Political heats in Kenya continue to raise above the seas levels as election period draws closer. Over six candidates have declared their interests in the top seat but of course in the end there will be one president. The current situation in Kenya does not allow any of the interested party to slumber. The recent candidate to declare his interest in the race is coming out strongly and this continue to crack the heads of the already dominant parties and thus requires them to think hard.

As usual during such periods people tend to form alliances which they believe will help mobilize supporters from all over the country. The current trending news is the possibility of the former prime minister honorable Raila Odinga teaming up with his long friend who turned to be his opponent and the current deputy president of the republic of Kenya his excellency honorable William Ruto. Well it is not news to some of us since one of the Ruto’s ally Member of Parliament representing gatundu honorable Moses Kuria had leaked the possibility of the two working together. The MP said that the two will work together in 2022 and it will be his wish for the same to happen. It was confirmed recently that the two in question had a private meeting and of course it was about the coalition. So the big question is who will back another. The two have high political profile and it is all about ego. According to expert if the two will work together it is possible that there will be a share of government just like in 2007 or it will be Raila. Raila is known to be skillful when it comes to deal making. Several deals he had been involved in either comes to a win-win situation or to his favor and the same will continue to happen with other deals he will engage in.

on the other hand Mudavadi, Wetangula, Kalonzo and Gideon moi announced their possibility of forming an alliance. But though from the time they launched their interest in working together, they have not come out to confirm their plans, although there have been a wrangle among them on who should be a flag bearer they seem to form a good team. Mudavadi for instance is the kingpin of the luhya nation; Gideon was recently declared kalenjin spokesperson replacing Ruto whereas Kalonzo has been always the spokesperson of the Akamba people. With calculation done correctly it is possible for them to win. Martha karua has been an iron lady in the political arena which in one way gives her an upper hand in vying for the top seat. With a good example set in Tanzania many Kenyans may have realized that it is time to let a woman lead so any person wanting a coalition should consider her as first priority. The succession for presidency will not be that easy.

Content created and supplied by: kambramint (via Opera News )