"If You Want Ruto To Resign, Call Him On Phone And Resign as Well" Ruto Ally Attacks Uhuru (Video)

Kapseret Mp Hon Oscar Sudi has asked President Uhuru Kenyatta to completely avoid disrespecting His deputy William Ruto, urging that Uhuru never appointed Ruto in government but they worked together to secure the Votes that enabled them smoothly ascend to power in 2013 and 2017 respectively.

The Vocal Mp who had joined other Tangatanga leaders to attack Uhuru now says that Ruto's allies are not undermining Uhuru's administration in any way and therefore He should also learn to respect Ruto. Sudi added that Uhuru has subjected Ruto to all manner of problems and Pain for all these years that they have been working together.

He also stated that the people who are sorrounding Uhuru Kenyatta including Raila Odinga, Moses Wetangula Kalonzo Musyoka and Musalia Mudavadi never supported Him when in need but He is giving them maximum respect.

"I want to tell to our former Boss Uhuru Kenyatta that we are not in any way trying to fight His government but He should stay away from His behavior of lacking respect. You are now saying that Ruto should resign but I want to remind you that you never appointed Him to that Office. Without Ruto, You would never be the president. Other people who are your closer allies like Raila, Mudavadi, Kalonzo and Wetangula never supported You but Ruto did. "Sudi says.

The lawmaker went ahead to add that Uhuru and Ruto have been close friends from the year 1997 and the best thing that Uhuru can do is calling Ruto directly on the Phone so that they can have a meeting to inform Him to resign officially.

Sudi said that He was young in 2002 when He witnessed Ruto supporting Uhuru wholeheartedly and for that reason, they should meet and agree to both resign so that Kenyans can know that they elected two lazy people who have no capacity to lead the nation any more. 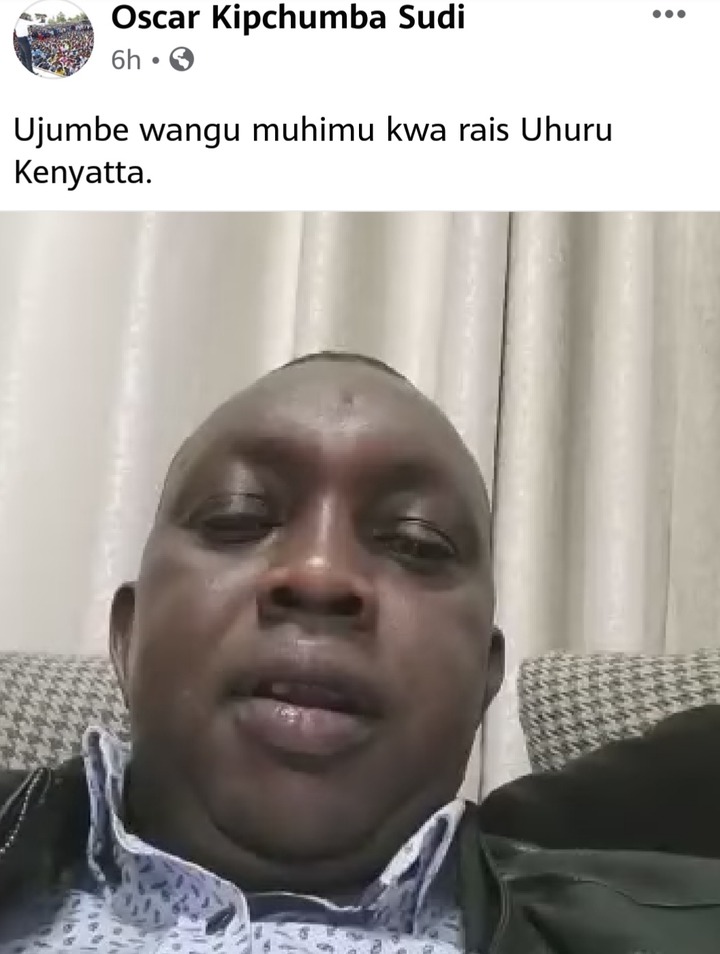 "If you really want Ruto to resign, just pass a call to Him and organize a meeting so that you can agree on His resignation. You have been close friends as from 1997 and Ruto even rallied behind you in 2002, and I saw it because I was young at that time. We don't understand you anymore. The best thing that you both should do is moving out of that Office so that Kenyans can understand that they voted two people who cannot lead them anymore. "He posed.

Sudi's reactions was triggered by Uhuru's sentiments yesterday night during an interview where He clearly stated that Ruto should move out of government and tender his resignation rather than attacking Uhuru and the same Jubilee administration whole He still sits on it's Offices, Houses and even goes around to brag of the developments while doing His Campaigns.

Ruto has been showing His defiant nature for close to four Years now since the 2017 general elections after He fell out politically from His Boss who also removed Him from His list of endorsement.

The link below shows Sudi's Video :