Since 2018 president Kenyatta and the ODM leaders have been in a very good relationship. A relationship that no Kenyan had ever thought of. The two came together after the 2017 disputed elections that saw Raila Odinga go forward to swear himself as the people's president. Since then the president seems to be having more peace when running the government. Their relationship yielded the Building Bridges Initiative whose purpose was to solve the after election violence after every election and unite Kenyans from across the country. 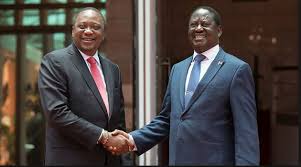 The two have pushed it and at the moment they are championing for constitutional reforms. The reforms are in the BBI proposals. Although the document has faced a lot of opposition and stumbling blocks, the two have set up a strong team of lawyers that will be representing them in court to battle out in a legal process. Many have already predicted that the case might turn out to be in favour of the two. Since there is a possibility of winning the case many have now suggested that the two look for a very vibrant leader that can lead Kenya from 2022.

At the moment there are rumours that the two are planning for a coalition come 2022. This could turn to be a mess after all the struggle they have made in delivering the BBI bill. One of them running for the seat after BBI has gone through will be seen as a way of self benefit, instead they should make the reforms and leave a good legacy by handing to Kenyans a leader who can then run the government in a accordance to the reforms. This will then let them retire in peace and with lots of blessings.

In an event that one of them runs for presidency in 2022 then turns out unsuccessful, their legacy will have been spoiled. Hence for them to be remembered and praised in the books of history they should consider letting someone else that seems strong and who has the love for Kenya to run for the seat.