Murkomen Issues Revelation About The Current Life Of Raphael Tuju

By Tugat (self meida writer) | 1 months

Taking to his Twitter timeline on Tuesday morning, Murkomen provided that Tuju is currently in a very bad situation and has nothing after he was declared bankrupt. He added that were it not for a court order he would not be holding any political position.

Murkomen seemed to be disappointed with the actions and comments of Tuju which involved delivering harsh words to the Judges of the High Court.

" The way Mr. Raphael Tuju of Rarienda is threatening Judges would make you think he is not the same person fighting for his dear life after he was declared bankrupt. Without a court order he couldn' t be holding any office not even as the chairman of Nyayiera cattle dip, " Murkomen posed.

This comes after the former Rarienda Member of Parliament condemned the actions of the five judges who issued a ruling against the popular Building Bridges Initiative (BBI).

According to the remarks made by Tuju on Monday were that the Judges are not supposed to fight the Head of State His Excellency President Uhuru Kenyatta and his Jubilee government because they also depend on the same administration for a couple of things. 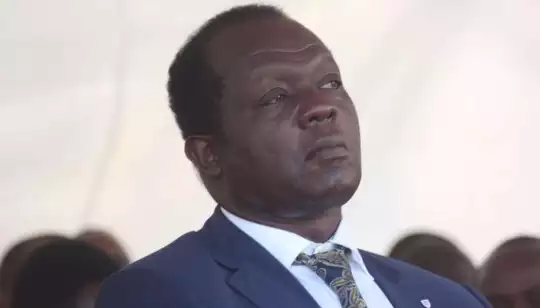 Tuju also warned the Kieleweke members and other anti- BBI advocates not to celebrate the ruling because it is not worthy.

Another person who also raised his concerns on these remarks was Law Society of Kenya President Nelson Havi who warned Tuju that he should be very careful of his words.

On the other side of the coin, things seemed to be the opposite since members of the Kieleweke team led by His Excellency the Deputy President William Samoei Ruto expressed their satisfaction with the Ruling of the High Court.