By KipkiruiVictor_02 | self meida writer
Published 29 days ago - 8 views

Speaking in one of the channel Kalonzo Musyoka today criticize the deputy president of his hustler claim of empowering the poor. This has comes after his backyard was intensed with Tangatanga allies campaigning for their UDA senatorial candidate for by election. 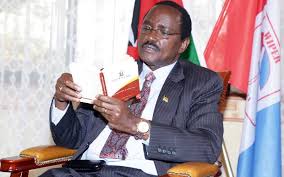 Kalonzo Musyoka claimed that the deputy president is stealing the public resources and take them claiming that it's evil. He has condemned him for distributing the wheelbarrows and mkokotenis claiming that it can't fit the current life structure and says that it will increase poverty in the country.

He further blamed the deputy president of failing to create several million jobs he promised to the kenyans during his 2017 campaign. He has also accused him of hindering the big four agenda aimed by the president Uhuru Kenyatta to deliver to kenyans before his term ends.

Concerning the rumours spreaded that he and Raila Odinga could unite before 2022 general election it's now clear that the coalition is like expecting oil to mix water which is impossible. There is no permanent enemity in politics but the only problem is that everyone has diverging views.