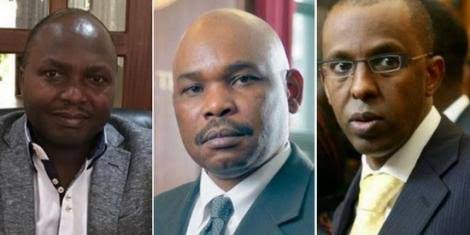 Lawyers have influenced Kenyan Politics over the past General elections. These top lawyers have been giving out their views and support on different Presidential aspirants.

In the Weekends Nation Newspaper, Ahmednassir revealed that he supports Deputy President William Ruto being that DP Ruto is his client when it comed to matter of law. This can even be traced back when Ahmednassir was to represent Ruto's ally Harun Haydin in the Court.

The influence of Ahmednassir can also be too worrying to opponents. Ahmednassir revealed that One Kenya Alliance has got no chance in the upcoming General elections because it was very difficult for them(strangers) to fool the Kenyan citizens.

It was also during the exclusive interview that Ahmednassir revealed that KANU party Leader Gideo Moi would even struggle to win the Member of County Assembly Seat in Baringo County.

Ahmednassir self gear to support DP Ruto may influence other social media users to change their minds and vote Deputy President William Ruto..

On the other side, Donald B Kipkorir and Proffesor Makau Mutua comments and tweets are always those that are directed to support ODM's leader Raila Odinga. With the role that these lawyers play, they always campaign for the Presidential aspirants through the social media platform.

The lawyers also have been conducting online polls to determine who will carry the day of elections are to be conducted today. These online polls may be used by the aspirants to identify whether they have got good political influence or not.

Mudavadi Sends a Warning To President Kenyatta Over Raila's Presidency, Reveals What Will Happen

The Schedule For The Deputy President In Western Kenya Released

DP Ruto Is Expected To Land In Kakamega County Today