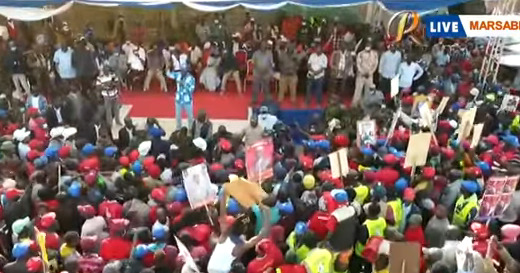 Azimio La Umoja One Kenya Alliance Marsabit's campaign rally, that was led by Raila Odinga, was on Thursday June 23rd interrupted after supporters of two different political parties in the coalition clashed.

The supporters of UPIA party and the United Democratic Movement (UDM), made it hard for Raila to make his remarks, a move that propelled the police to intervene after chaos were witnessed before he resumed his speech.

Making his remarks shortly after the tension ended, Wiper party leader Kalonzo Musyoka revealed that in the beginning of the rally, the venue was full to capacity, but the clashes forced some of the residents to run for their safety.

He went on to say that leader and supporters of different parties should ensure peace reigns during their campaigns, saying that chaos and stoning each other has no benefit and only drives away peace and unity.

"I preach peace for the people of Marsabit. I want to request you the residents of Marsabit County to know that the politics of throwing stones is not good. By the way, I arrived here before Raila, and this place was full, but when people starting throwing stones any how, some left."

"I want to tell you if Raila wins in August, you will not be fighting, and there will be peace," he said calling upon the residents to support Raila's presidential bid.