By Kimtheblogger (self meida writer) | 15 days 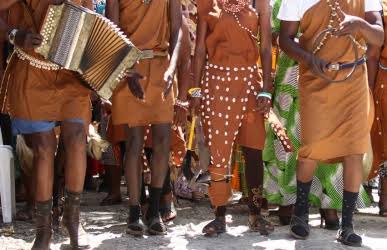 Dishonoring ruracio has very serious outcomes.In Kikuyu cultural tradition, men will rarely follow up their in-laws to seek for refund of the dowry. Under the same note, unproductive women are also not sent back to their parents, after traditional ceremony of marriage is done.The respect for the oath restrains many from rushing to court.

This is the greatest reason why most Kikuyu men will hardly force their in-laws to the courts for reimbursement of dowry after traditional marriage collapses. This is because, the community's tradition has strategies on how the dowry refund is conducted where necessary.

Gikuyu and Mumbi Cultural Museum Director-General Samuel Kamitha explained that after a 'Mwati' and 'Harika', the Ewe and a he goat are taken and the two families share 'Njohi ya Njurio', meaning the liquor for asking hand in marriage, the union takes a a certain direction, unlikely to make a turnaround.

He says that Kikuyu traditional marriage is an oathing and at no point should one send away the wife. Even if she becomes uncontrollable or cheats, the hubby can only build a separate house for her and her children but remains to be his wife.

Kikuyu Council of Elders Secretary General Rev Peter Munga affirmed that saying that sending back a woman with children to her parents is a way of messing her life as she is unlikely to get another suitor.

The Salary And Benefits Of The Chief Justice

6 Police Officers Saved From Being Evicted in Kirinyaga

Vocal MP Drops A Shocker On Parliament, Says 40% Hold Only This 'Genuine' Document

Do Not Take Covid-19 Vaccine Before Seeking The Doctors Advice If You Know You Have This Conditions.

HELB To Disburse Money For Second Semester Of Academic Year