By Updates (self media writer) | 24 days ago 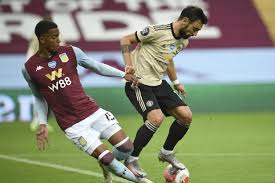 Manchester United will be looking to keep the rest of English premier league title challangers as they host Aston Villa at Old traford on Suturday afternoon.

The Red Devils have started their new campaign on a promising note taking 13 points out of a possible 15 after the first five gameweeks compared to just seven points after five games last season.

Jesse Lingard's strike in the 89th minute against Westharm should have sealed the win for United but a couple of dodgy refereeing decisions later saw then concede a penalty at the dying moments of the match as Mark Noble lined up to take a penalty. David de Gea rose to the occasion and produced a wonderful save to rescue all three points for Manchester United.

1-0 defeat to West Ham United in the EFL Cup after Ole Gunnar Solksjaer made as many as 10 changes to his side from the weekend.

A 3-0 thumping of Everton in their latest outing ought to give Dean Smith's men a lot of confidence ahead of the game against Manchester United.They put up a good fight against Chelsea in their EFL Cup game but lost out on penalties.

Manchester United have not lost to Aston Villa in the last 17 meetings between the two sides. In their last 10 games against each other, United have emerged victorious on eight occasions while two matches have ended as draws.

The last time the two sides locked horns was towards the end of the last campaign in May and the Red Devils won the game 3-1 at Villa Park.

Marcus Rashford and Amad Diallo continue to be sidelined with injuries. Edinson Cavani is nearing a return. Phil Jones is back and could make the bench.Dean Henderson is also back from injury but David de Gea is likely to keep his place as the first choice.

On Villa's side, Leon Bailey picked up a knock during Aston Villa's 3-0 win over Everton Keinan Davies is unavailable due to injury. Morgan Sanson suffered a hamstring issue in the League Cup game against Chelsea.

John McGinn might not be cleared to play due to the concussion protocol. Matt Targett is also a doubt after sustaining an adductor injury. Axel Tuanzebe is not allowed to play against his parent club.

Content created and supplied by: Updates (via Opera News )