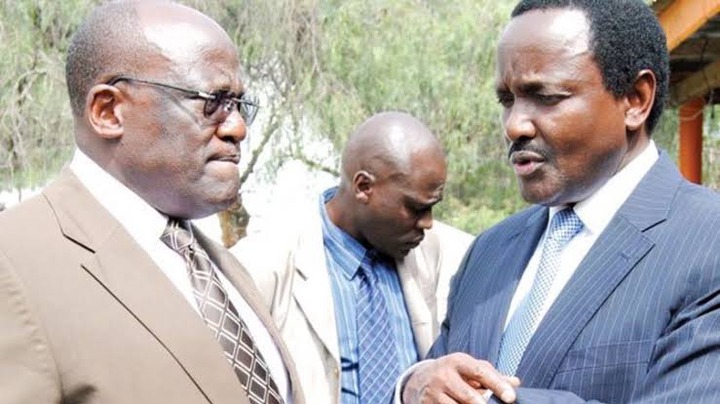 The Ukambani leadership is undergoing turbulent times due to the current and ongoing political affiliations in the community. The region that was initially united under Kalonzo Musyoka, wiper leader, has been shifting allegiance lately with some leaders drumming their support to deputy president William Ruto.

During the burial of AIC Bishop Bernard Nguyu at Mitaboni in Machakos county, the family hosted a rare gathering which comprised of various Ukambani leaders with different ideologies. Among present was Machakos governor, Alfred Mutua, Kivutha Kibwana, Johnston Muthama, the interim chair of the UDA Party, Wiper leader Kalonzo Musyoka and the Senate aspirant who is also Muthama's ex wife Agnes Kavindu.

Kalonzo was the last man to speak on the podium and took this opportunity to poke at Muthama in his presence. He ridiculed the fact that his ex wife was going to run against him for the Senate seat in Machakos by election on a Wiper ticket. He jokingly also added that he shall only return Muthama's wife to him after 2022. Something the UDA Party Chair did not find amusing and rubbed him in the wrong way.

“I am telling you that next year, you will see Muthama running to perch on my chest, because he knows where we are and where we are going. Even if he gets irritated, I’ll hand over his wife Kavindu back to him,” The wiper leader said. Muthama consequentially stood up and charged at Kalonzo while he was giving his speech ready to fight him. He was however blocked by several MPs from the region.

Kalonzo was forced to cut his speech short after the incident because a section of the crowd had also started getting restless.