- Kiharu Mp says if Uhuru became President in 2002, Kenya would be a Banana Republic.

- He accuses President Uhuru Kenyatta of collapsing the country's economy.

- He note that President Uhuru Kenyatta has destroyed democracy. The Kiharu Constituency Member of Parliament Hon Ndindi Nyoro has explained what would have happened if President Uhuru Kenyatta became President in 2002.

In a statement on Sunday 19th afternoon, the outspoken Mp note that Kenya would be a Banana Republic if Kenyatta had occupied state house.

He accuses President Uhuru of destroying the country's economy apart from destroying democracy.

"If President Uhuru Kenyatta became President in 2002, Kenya would be a Banana Republic. Beyond collapsing our economy, he has annihilated the Institutions President Kibaki built and in the process destroyed our democracy."

This seems to be a change of tune for Ndindi Nyoro who was advocating for dictatorship in 2017 when he was full in control of Jubilee Gov't. 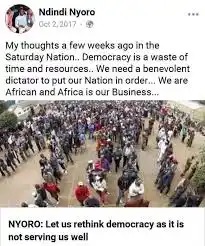 Kenyans told a meeting Uhuru has convened to held with Azimio allies as IEBC tallies the results.

"I Will Table Bills to Protect Poor Aspirants, The IEBC When We Resume Parliament" Ruto Ally Says

Ruto's Opposers In Rift Valley Lose In This August 2022 Elections

Prominent ODM Leader Confirms He Won't Attend Azimio Meeting At KICC, Says What He Will Do

Whether Raila Wins Or Not, The Luo Nation Will Support Kalonzo In 2027, Says ODM MP

'Tulijua Kabla Ya Uchaguzi' Jubilee Alleges What Happened on August 8